Lisa Johnston is the author of Wakeless which was published by Island Times books on 17 April 2021.

Lisa kindly answered a few of my questions.

1. Tell us a little about Wakeless.

Written in journal format, Wakeless takes place in a not-so-distant dystopian future where the main protagonist Emma has somehow survived the wreckage of the late 21st century. Gas reserves have run dry, hospitals have shut and diseases are rampant. She is found living in a basement hideout, proclaimed clean and moved to a self-contained society called Redemption City. However, it does not take Emma long to discover that life is no better in the promised utopia—secrets abound, no one is free and eyes are always watching. Troubled by ghosts of her past and an unreliable vision of reality, Emma must find a path to redemption or pay the ultimate price.

The inspiration behind the book was definitely Margaret Atwood’s The Handmaid’s Tale. After I read the book in high school, I was consumed with the intricate and strange Gilead society she created. A few years later, I travelled to Arizona where I saw the biosphere. I began to consider what life would be like if a group of people had to permanently live in an enclosed society. Could they flourish both physically and emotionally? Could it fulfil all their human needs? Combining those two ideas I wanted to create something as dark, disturbing and unique as Gilead which led to the creation of Wakeless.

I am what they call a panster. I let my characters tell the story with no planning ahead; in essence flying by the seat of my pants. I had no idea how Wakeless was going to end and why some of the characters did the things they did. There were times I wanted to yell at Emma and tell her to stop but ultimately, she told the story. I was just the vessel to share her story.

4. Was there anything about the process of publishing a book that surprised you?

There was so much to learn during the publishing journey. I was surprised by how many tasks go into the creation of a book beyond the writing. Not only am I the author but I am also the marketing person, technology guru and social media campaigner. It has been a tremendous amount of work but it has been one of the most rewarding things I have ever done. In addition, the writing and blogging community has been incredibly responsive and generous with their time. I am forever grateful for the support I have received.

I like to spend time outdoors whether going for long walks, sightseeing or playing a little bit of tennis. My family loves to travel—which we have missed over the last 18 months—and we cannot wait to get back to Europe and to explore other regions of the world. We are also huge sports fans so we like to cheer on our teams. And of course, I love to read which includes almost any genre!

It would definitely be The Handmaid’s Tale. I love everything about the dystopian world Margaret Atwood created and I could reread the book over and over again learning all about the intricacies of Gilead. For a brief moment when I read this question, I pondered picking something longer like The Pillars of the Earth as it would be like starting a new book each time you finish the masterpiece due to its length. However, I would feel disloyal not picking The Handmaid’s Tale seeing it is my favourite book and the inspiration behind Wakeless.

7. What question have you not been asked that you wished you had been asked?

Was it hard to release your book to the world? I had really mixed feelings when I pushed the publish button. I was so excited to see my book for sale and to have the printed copy in my hands, seeing the cover with my name on it, but it was also terrifying to share it with others. I felt like I was opening myself to let them into the dark corners of my mind and into my soul. This was a creation of blood, sweat and tears. It will always be a part of me. 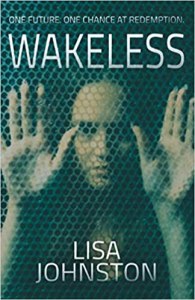 One future. One chance at redemption. Emma has somehow survived the wreckage of the 21st century—gas reserves have run dry, hospitals have shut and deadly diseases are rampant. She now faces her greatest challenge. Discovered living in a basement hideout, she is proclaimed clean and moved to Redemption City. Despite escaping the contaminated world, Emma soon learns that life is no better in the promised utopia—secrets abound, no one is free and eyes are always watching. A young woman in a repressive role, Emma begins unravelling the true purpose of Redemption City. Rebelling against the male hierarchy, she reluctantly joins forces with a potential ally. Troubled by ghosts of her past and an unreliable vision of reality, Emma must find a path to redemption or pay the ultimate price.