A Sin of Omission by Marguerite Poland was published by Envelope Books on 18 November 2021.

Marguerite kindly answered a few of my questions.

1. Tell us a little about A Sin of Omission.

In the Eastern Cape of South Africa, Stephen (Malusi) Mzamane, a young African Anglican priest, must journey to his mother’s rural home to inform her of his elder brother’s death. First educated at the Native College in Grahamstown, Stephen was sent to England in 1869 for training at the Missionary College in Canterbury, andhas high hopes of a promising career. But on his return to South Africa, he is relegated to an isolated mission and has to confront not only prejudice from colonial society but discrimination within the Church itself. Conflicted between his loyalties to the colonial cause that he is expected to uphold and the amaNgqika people, for whom his brother fought, he is stricken by longing for an impossible love, and his journey to his mother’s home proves decisive in resolving the contradictions that tear at his heart.

2.  What inspired the book?

My forebears were Anglican missionaries in the Eastern Cape region of South Africa from 1862–1916. When I was about thirteen my great uncle, who was brought up on a mission in the Eastern Cape, told me a moving story about one of his missionary grandfather’s young black students. It haunted me, despite the sketchy details. Forty years later, in 2003, I was commissioned to write an institutional history, during the course of which I had to touch on the education of black people by those Anglican missionaries in the nineteenth century. I came across an entry in a hand-written manuscript which made me realise I was reading about the student my great uncle had told me of so many years before. Having identified his name led me on a long journey of discovery through the archives which exist both in South Africa and England, and into the heart of rural South Africa. I would like to have tackled a biography but there were too many gaps in the record, as well as other constraints. I am not a biographer or historian by training (my field is African languages) and, although I remained as scrupulous as I could to the events, tone and themes that emerged from the material, I decided to write a novel, closely based on incidents and attitudes I discovered there.

I am a plan, plan, plan writer, which means I confuse myself endlessly with all the notes and timelines, USB backups and memos to myself!  I always know the ending of my story but am constantly side-tracked along the way. That said, I know why I am writing the story in the first place and how it must end and that helps me pick my way through mountains of research material and my own wild ideas.

Just how many times a text can be edited, re-edited and re-invented (even as it goes to print) and how many mistakes slip through, despite rigorous proof-reading by half a dozen people, including endless reappraisals by the author! That rogue comma! That forgotten space!

There never seems much time to relax. I have a hectic life! My choice for real relaxation is to go off to the Drakensberg mountains to potter about, or to spend time on friends’ farms in the Eastern Cape or the Great Karoo – wide open spaces. Silence. I love exploring places related to the history which informs so much of what I write. These are mostly unobtrusive spots but they have huge meaning to me and I love revisiting them. At home I love my small garden. The biggest delight is finding chameleons or mantids or tree frogs hiding in what is seen as a rather unruly patch! I wish I could go back to Scotland. I have a fascination for the isles (my father was Scottish).

6. I like to end my Q&As with the same question so here we go. During all the Q&As and interviews you’ve done what question have you not been asked that you wish had been asked – and what’s the answer?

Question: Why does your great-great grandfather’s life have such a hold on your imagination (whether obvious or not) and why has it been integral to almost all the work you have done in the last thirty years?

Answer: Because (in true African parlance) he is my ancestral shade. He chose me. And I accepted. It’s been a hard road but hugely fulfilling. It made me belong. 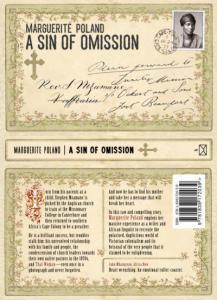 Torn from his parents as a boy in the 1870s, Stephen Mzamane is picked by the Anglican church to train at the Missionary College in Canterbury and then returned to southern Africa’s Cape Colony to be a preacher.

He is a brilliant success, but troubles stalk him: his unresolved relationship with his family and people, the condescension of church leaders towards their own native pastors, and That Woman—seen once in a photograph and never forgotten.

​And now he has to find his mother and take her a message that will break her heart.

​In this raw and compelling story, Marguerite Poland employs her considerable experience as a writer and specialist in South African languages to recreate the polarised, duplicitous world of Victorian colonialism and its betrayal of the very people it claimed to be enlightening.