Matthew Franklin Sias is the author of Frolic which is published by Vulpine Press on 8 October 2021.

Matthew kindly answered a few of my questions.

1. Tell us a little about Frolic.

Frolic is a humorous (I hope!) take on the misunderstood world of nudism and naturism. The protagonist, Brian, is a man approaching middle age, who finds himself living in a nudist park with his grandmother after having been fired from his job as a University Professor.

A self-described “alcohol enthusiast,” Brian struggles to maintain sobriety as he is led on a whirlwind tour of the entirely foreign world of naturism by his guide, the beautiful, blond, free-spirited, hopelessly disorganized, and perpetually naked Lisa.

As an outsider to the culture, Brian confronts his own demons and insecurities, as well as eventually developing an affinity for the eclectic residents of Deep Valley Nudist Park.

I have always been fascinated with misunderstood subcultures and contrarians, sometimes going so far as to immerse myself in those subcultures! For several years, I was a member of a landed naturist club in Washington State. This club as well as another provided the inspiration for Deep Valley. Characters in Frolic are hybrids of some of the interesting folks I have met through naturism.

I sought to dispel some myths about the culture or lifestyle, one being that the world of nudism is populated by hedonistic old hippies. While people who fit that description do exist, nudists come in every size, shape age, political persuasion, and religious belief. In a way, organized nudism is very conservative, with a few inviolable rules designed to keep participants safe and respectful.

For months, I had attempted to plan out, in detail, the plot, conflict, and conclusion to Frolic, but found that I was getting nowhere without actually starting the process. I started with three key characters, Lisa, Brian, and Grandma Clara, and developed a basic understanding of their personalities and motivations before delving in. Once I started writing, I let the characters take me where they pleased. Soon, several minor characters materialized spontaneously, and the plot began to take shape. As I am sure many writers would attest, fictional characters seem to take on a life of their own. I am often surprised by how they grow and change the plot in ways I never would have expected.

My first two published books were autobiographical; I found the process of writing fiction both challenging and satisfying.

Probably how much work it takes to get it right! I must have completed at least a dozen edits and re-writes, added details, and removed small vignettes that added little to the progress of the story. Even now, I can look at the script and wish I had expanded more in certain areas.

My “day job” is as a firefighter. The schedule allows me a lot of free time. Spring and summer in the Greater Seattle area, where I live, are glorious, sunny, and mild. I do a lot of kayaking with no particular destination in mind, saltwater swimming, and just observing the sea life. I have two young daughter, and I enjoy taking them to local parks and getting ice cream afterwards. Winters here can be a bit dreary. I usually write, read, and occasionally find my way back to the gym after a long hiatus.

I would like to read the complete works of C.S. Lewis, the late British writer and theologian. Like Lewis, I have always wished I could have faith in the Almighty, but have struggled with various intellectual hang-ups along the way. I’m still a skeptic. I think C.S. Lewis published around thirty books, so that should take me a while!

Why do you write?

For me, it’s cathartic. It’s a way of opening the pressure valve on my constant internal monologue. I think there is something satisfying about leaving a legacy, no matter how small it might be. Writing has never been a money-making venture for me. I write about what interests me, and if others are interested in what I write, all the better! 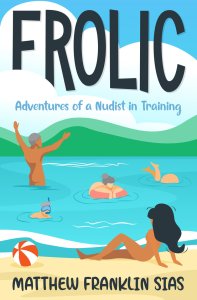 A nudist park wasn’t exactly where Brian thought he’d be at thirty-four. But homeless, jobless, and about to be divorced, it’s where he ends up. Living in his grandmother’s trailer, whiling away the days in a drunken stupor, his elderly neighbor gardening totally starkers.

A self-confessed ‘textile’ and alcohol enthusiast, he is at a crossroads in life. But when the park’s future comes under threat, Brian finds himself desperate to save his new home and the rest of its aging residents.

Over time he becomes drawn to these extraordinary people, where no one cares how much money you earn or what you look like. Where people are free to be themselves as nature intended.