Matthew Ross is the author of Death of a Painter. His latest novel, The Red Admiral’s Secret, is published by Red Dog Press on 3 February 2021.

Matthew kindly answered a few of my questions.

1. Tell us a little about Mark Poynter.

Mark Poynter is the reluctant protagonist in my novels: a series of darkly comic crime capers. Mark’s a genuine ‘everyman’ character: he’s trying to keep his business afloat, he has family concerns, he’s still grieving the death of his father and he’s in the early days of a new romance – all normal things affecting each and every one of us. We meet him in my first novel, ‘Death Of A Painter’ when he discovers his friend murdered on their building site – Mark worries he was the actual intended victim but the police suspect he’s the killer – he needs to find the truth, and quickly.

Mark, and his crew of slackers, idlers and gossips, return in the second book in the series, ‘The Red Admiral’s Secret’. It’s published on 3rd February 2021 and the blurb tells us: A Premier League bad-boy murdered at his newly refurbished home; a teenage runaway’s corpse uncovered on a construction site; a gunman shoots up the premises of the local gangland boss – all of them projects run by beleaguered builder Mark Poynter. Can he fix it?

2. What inspired the book character of Mark Poynter for the series?

In ‘Death Of A Painter’ my character Mark still finds the loss of his father quite raw and it influences his decision-making as he tries to navigate his path along the grey margins of criminality but I’ve since realised that Mark’s loss was actually my own way of expressing mine. To cut a long story short, I had a fun hobby as a comedy writer that was gaining traction with the potential of becoming a possible new career. However in the same three-month period my work situation changed, my father died and my first child was born – as you can imagine it was a bit of a head-scrambler. Something had to give, and it was the writing. After a few years the itch to write came back itchier than ever however I felt the full-length novel was more where my focus was, and so I began to write. The end result was ‘Death Of A Painter’.

As regards the setting, I chose to set my stories in and around the building trade because firstly that’s my own background but also because I’m a big fan of crime and mystery fiction, and I’ve always been a bit partial to stories where the lead character isn’t necessarily a detective but an ordinary person thrown into an extra-ordinary situation.

I’m very much a planner. The prospect of starting without a plan fills me with dread. I had a 7,000 word sketch overview for ‘The Red Admiral’s Secret’ before I started. That was light compared to my first novel ‘Death Of A Painter’, which was closer to 10,000 – but that included very detailed character profiles for everyone, which weren’t necessary for ‘The Red Admiral’s Secret’ because I knew them all so well by then. I can’t work without a plan, I’ve tried but I end up noodling about then losing interest. Also, due to other commitments, I’m unable to write every day, sometimes I’m lucky if I get one session a week. I find having a plan cements in my mind the scenes like stepping stones I need to navigate, and somehow a processor works in the back of my head silently fleshing out those scenes whilst I’m busy concentrating on other stuff so that when I do get the chance to sit down and write, the words come very quickly.

4. Having been through the publishing process, is there anything about the process of creating a novel that surprised you?

I have been astonished – in a very nice way – how welcoming and supportive the book community is. In every other aspect of my life there’s been an element of competitiveness. But in the writing community that’s not there – instead there’s a feeling of positivity and encouragement. I guess that’s because everyone has a different tale to tell and a different voice to say it with – if two people are both party to the same anecdote, they’ll both end up telling it differently. In my short time within the writing and book community I have only experienced warmth and kindness, and it’s lovely.

I’ve got two young sons, so most weekends (when we’re not in Lockdown) I’m Dad’s taxi. We’ve also got a puppy who is six months old and full of energy, she’s great fun. She’s given me the excuse I needed to get out every day and explore the woods and fields we’re so lucky to have nearby. I find an hour’s walk every day taking in the fresh air and daylight so invigorating and relaxing.

If you could get a review from just one person, who would it be? And the answer is my Dad. He died in 2010, long before I even had the idea for ‘Death Of A Painter’ – but he knew I would write a novel and he knew it would be published. He had so much belief in me – more than I did myself at times – and his support is still something I rely on now. The thought of seeing him with a copy of my novel in his hand makes me well up.

When Mark Poynter discovers a murder on his worksite all of his financial problems suddenly seem a lot closer to home: was this a warning his debts are overdue?
Suspected of being the killer and worried at being the intended victim, the murder only makes Mark’s money problems worse, leading him to turn to the local villain, Hamlet, who has his own unique repayment plan in mind for Mark.
When two more deaths plunge him even further into debt, Mark finds himself faced with a choice – help the police and clear his name or help the villain and clear his debt.
Set in the Medway Towns on the grey margins of criminality, where no job’s too big, no dodge’s too small … 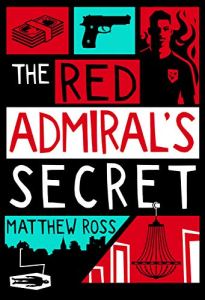 A Premier League bad-boy murdered at his newly refurbished home; a teenage runaway’s corpse uncovered on a construction site; a gunman shoots up the premises of the local gangland boss – all of them projects run by beleaguered builder Mark Poynter. Can he fix it?

Things seem to be on the up for builder, Mark Poynter. Mark’s got himself a nice little earner taking care of the sizeable property portfolio built up from the career earnings of former Premier League bad-boy and local celebrity, Danny Kidd. But when Danny Kidd puts an interested party’s nose out of joint by using his star status to gazump them on a development site – the derelict Admiral Guthrie pub – things turn ugly and incendiary, leaving Mark to deal with the consequences.

Meanwhile local villain, Hamlet, uses his subtle persuasion to dupe Mark into unwittingly help him launder vast sums of dirty cash but when it drags the area to the brink of gang warfare, Mark’s help is needed to try and broker a truce.

At the Admiral Guthrie secrets from the past meet conflicts of the present – will the rising flames reduce Mark’s future to ashes?