Jini Reddy is the author of Wild Times. Her latest book, Wanderland, is published by Bloomsbury on 30 April 2020.

Jini kindly answered a few of my questions.

1. Tell us a little about Wanderland.

Wanderland is about my search for the magical in the landscape – magical in the literal sense – and it took me across Britain. The book has been described as having an unusual eco-spiritual edge and it blends nature and travel writing and memoir. It also touches on themes of identity and belonging. I was born in London, raised in Quebec, Canada, my parents are Indian and grew up in South Africa, so whilst I was seeking the magical ‘Other’, I was also exploring my own feelings of otherness.

I’d been a travel writer for many years, and I craved a more spiritual dimension to my roaming. I’d also long felt a sense of kinship and belonging in nature and I wanted to go deeper still. I was especially inspired by those people from indigenous cultures who I’d occasionally met on my travels. That rich, dynamic communion with the forces of nature that they spoke of inspired me. And I’ve always been drawn to magic and mysticism. Plus one night, about five years ago, I was in the Pyrenees on a solo nature quest and had an uncanny experience out there in wild. That, in part, sowed the seeds for the book.

I’m definitely a sit-down-and-see-where the words-take-me kind of writer! When I met first met my publisher-to-be at Bloomsbury, he asked me to write a table of contents for the book, so I cobbled something together. But I knew that when it came down to it, I would be researching and writing in a more organic fashion: If the book was to be about my search for magic in the landscape, well I was going to invite ‘magic’ to help me light the way. So that meant following my curiosity and my intuition, paying attention to signs, letting things unfold, being patient too. That was crucial for a book with about an unorthodox journey, with a more esoteric, spiritual vibe. For me, a big part of the creative process generally is deep listening.

4. Having been through the publishing process, is there anything about the process of creating a book that surprised you?

It’s not a novel, though I did try to tell a story. The process of creating a narrative and telling it so that it reads almost as if it were a novel – that was challenging, but that was my aim. I guess you’d call it creative non-fiction. In terms of the publishing process, I’m always amazed at what a long, ongoing process it is to bring a book to publication. The editing, the design, the publicity and marketing – all of that requires input from the author.

I have a woods at the end of my street and I walk there most mornings. Generally, I love walking, hiking, cycling, anything that takes me into nature. Swimming too – but only at my gym pool, because I’m hopeless in deeper water! I’m a bookworm and I have a (secret) fascination for ASMR healing videos on YouTube!

Just one? That would be painful. I can’t even contemplate that! I can tell you that the last book I read was Maduri Vijay’s novel, The Far Field, set in Kashmir, which I definitely recommend. I love fiction, creative non-fiction, and books with a ‘journey’ theme that have a deeper, spiritual dimension

Great question! I wish people would ask me if I have an agent. Then I could tell them that right now, I don’t – but I really would like one! Even I am surprised that after two books I don’t have an agent. Both came about in a serendipitous way, and both with great publishers. But I’m determined to get representation for my third. So if you’re an agent reading this… 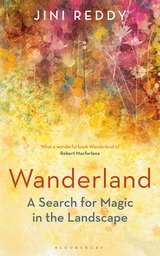 Alone on a remote mountaintop one dark night, a woman hears a mysterious voice.

Propelled by the memory and after years of dreaming about it, Jini Reddy dares to delve into the ‘wanderlands’ of Britain, heading off in search of the magical in the landscape.

A London journalist with multicultural roots and a perennial outsider, she determinedly sets off on this unorthodox path. Serendipity and her inner compass guide her around the country in pursuit of the Other and a connection to Britain’s captivating natural world. Where might this lead? And if you know what it is to be Othered yourself, how might this colour your experiences? And what if, in invoking the spirit of the land, ‘it’ decides to make its presence felt?

Whether following a ‘cult’ map to a hidden well that refuses to reveal itself, attempting to persuade a labyrinth to spill its secrets, embarking on a coast-to-coast pilgrimage or searching for a mystical land temple, Jini depicts a whimsical, natural Britain. Along the way, she tracks down ephemeral wild art, encounters women who worship The Goddess, falls deeper in love with her birth land and struggles – but mostly fails – to get to grips with its lore. Throughout, she rejoices in the wildness we cannot see and celebrates the natural beauty we can, while offering glimpses of her Canadian childhood and her Indian parents’ struggles in apartheid-era South Africa.

Wanderland is a book in which the heart leads, all things are possible and the Other, both wild and human, comes in from the cold. It is a paean to the joy of roaming, both figuratively and imaginatively, and to the joy of finding your place in the world.