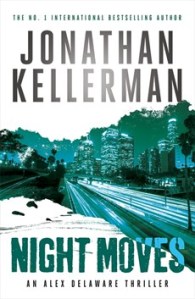 LAPD homicide detective Milo Sturgis knows there are crimes he cannot solve alone. And in this case, where the scene of the murder is as baffling as it is brutal, the good doctor’s insight is crucial.There’s no spilled blood and no evidence of a struggle. And without hands and a face, the body can’t be identified immediately. Alex and Milo must find out how and why this disfigured corpse has appeared in Chet Corvin’s upscale home when the family are certain they don’t know the victim. But for some unknown reason, their cooperation remains guarded.
Though the grass may be greener on these privileged streets, Alex and Milo both know there’s enough dirt below the surface to bury a multitude of sins . . . even the deadliest of all.

A family come home from an evening out to find a body in the study, the man’s face destroyed and his hands removed. Alex Delaware and Milo Sturgis must figure out who the man is and how he came to be in the house of people who deny knowing him. Are the family hiding something or does the “creepy” neighbour next door have anything to do with the murder?

As always, I find it difficult to review the latest book in a favourite series. There are flaws, as in any novel, but I tend to be blind to them, intent as I am on enjoying the brief, welcome return of old friends. But that in itself says something. The fact is that I’m still eager, some 33 books later, to read more of the investigative adventures of Alex and Milo, despite any issues I may have if I looked more closely at the book.

There is perhaps the staccato, sparse way of narrating that Alex has that could grate. It is, possibly, one that grows on you. Coming back to the series a year after the last novel this style is more obvious to begin with, but becomes the norm as the story develops.

Alex Delaware has his quirks, including the said narrative style. Almost surreptitiously, the reader learns more about the characters around Alex than the man himself. We know his girlfriend Robin has red hair and penchant for dungarees, his sidekick and best friend Lieutenant Milo Sturgis strains the buttons of his often clashing shirts and will, invariably at some point be referred to by Alex as ‘Big Guy’. What we don’t find out is what Alex looks like, or even what he wears.

The story itself was clever and pulls the reader along. There are a limited number of suspects and crime scenes and as such the story feels more contained and has that ‘locked-room’ feel to it. As with most of the books in the series there are a few clues here and there but not all of the information is revealed so  the reader finds out who the culprit is around the same time as the characters. The suspects and characters involved are not particularly likeable. The Corvins have issues that go back further than the odd dead body in the library and the neighbour is at first portrayed as someone who could potentially be on a watch list. The story is well-paced, with few big action scenes, though those aren’t required. I was soon wrapped up in the book and eager to find out who had done it and why.

The Alex Delaware series is one I can always rely on to entertain me. I relish diving into the latest installment and have remained a consistent favourite for many years. It was with a resigned sigh that I turned the last page, knowing I have to wait until next year for the next novel. An enjoyable, entertaining read. Recommended.

Jonathan Kellerman is the No. 1 international bestselling author of more than three dozen bestselling crime novels, including the Alex Delaware series, THE BUTCHER’S THEATRE, BILLY STRAIGHT, THE CONSPIRACY CLUB, TWISTED and TRUE DETECTIVES. With his wife, bestselling novelist Faye Kellerman, he co-authored DOUBLE HOMICIDE and CAPITAL CRIMES. With his son, bestselling novelist Jesse Kellerman, he co-authored THE GOLEM OF HOLLYWOOD and THE GOLEM OF PARIS. He is also the author of two children’s books and numerous non-fiction works. He has won the Goldwyn, Edgar and Anthony Awards and has been nominated for a Shamus Award. Jonathan and Faye Kellerman live in California, New Mexico and New York.

This was book 13 in my #20BooksofSummer challenge.