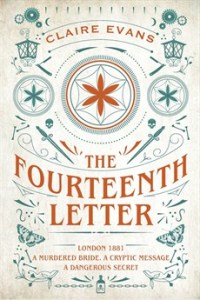 Phoebe Stanbury was killed in the summer of secrets…

One balmy June evening in 1881, Phoebe Stanbury stands before the guests at her engagement party: this is her moment, when she will join the renowned Raycraft family and ascend to polite society.

As she takes her fiancé’s hand, a stranger holding a knife steps forward and ends the poor girl’s life. Amid the chaos, he turns to her aristocratic groom and mouths: ‘I promised I would save you.’

The following morning, just a few miles away, timid young legal clerk William Lamb meets a reclusive client. He finds the old man terrified and in desperate need of aid: William must keep safe a small casket of yellowing papers, and deliver an enigmatic message: The Finder knows.

With its labyrinth of unfolding mysteries, Claire Evans’ riveting debut will be adored by fans of Kate Mosse, Carlos Ruiz Zafon and Jessie Burton.

Phoebe Stanbury is about to marry into the rich, and excentric, Raycraft family. Yet on the evening of her engagement party and naked man slashes her throat, stopping only to say to the young Benjamin Raycraft ‘I promised I would save you’. The next day William Lamb goes to meet a client, one he should not have met. There he receives a message to deliver to his employer, and a mysterious casket. When he delivers the message he sets in place a series of events that will alter his life forever.

There is something reminiscent of steam punk to the novel. The Raycraft family live in a fantastical house, with automatons, electricity, lifts and a rudimentary dishwasher. All of which is the stuff of science fiction for the rest of the inhabitants of 1881. It lends the book a tinge of the fantastic as a result.

There is a wide-ranging cast of characters. William Lamb is at first much like his name, meek and shy. Having been somewhat coddled against the real world by his aunt when he is faced with Savannah Shelton and others who have less than the best intentions towards him,  he doesn’t always step up to the mark. I found myself willing him to find some courage and mettle from somewhere, and that he does as the story progresses. Savannah Shelton is a completely opposite character to William, she overflows with mettle, and determination, a necessity after a hard life. She is a welcome balance to William. I also particularly liked Detective Harry Treadway, ostracised by his colleagues, he is determined, honest and conscientious. There are a whole host of heroes and villains to assist or thwart William, some slightly Dickensian, others markedly less so.

It took a while for the story to develop. There seemed to be little happening, or little that connected all the characters, but slowly the story comes together. The last third of the novel goes at a faster pace, pulling the strands together. I had guessed the thread of the story. It is quite a convoluted storyline, and a little more pared down explanation would perhaps help but even if the reader lets a lot of the minutiae wash over them, the gist of the what has happened is still clear.

Claire Evans used to work in the television industry and that shows in her writing. It was easy to envisage The Fourteenth letter as a serialised adaptation, lots of the scenes could be taken swiftly from page to screen.

This is an interesting, deeply plotted novel, not pure historical crime fiction, not completely steam punk either, there’s a balance of both met well. I’ll be interested to read more from Claire Evans in the future.

Claire Evans is an established business specialist in the UK television industry. After finishing her law degree, she qualified as an accountant, but realising her mistake quickly ran away to work at the National Theatre before finally landing a job at the BBC. Once there, she rose through the ranks to head up operations and business affairs across the TV commissioning teams. In drama, she led the BBC’s commercial relationships with the Independent production sector and a wide range of international co-producers and distributors.

She left the BBC in 2013 to pursue her writing career. Since then she has advised a number of drama and film production companies, most recently working on The Honourable Woman and Doctor Foster. She is also now the Chief Operating Officer at Two Brothers Pictures Ltd, the company set up by Harry and Jack Williams, the creators of The Missing.