Today I’m pleased to welcome author Paula Brackston to the blog. Paula is the author of The Witch’s Daughter, The Winter Witch and The Midnight Witch.  Her new novel, The Silver Witch, is published by Corsair on 3 December 2015

Paula kindly answered a few of my questions.

1. Tell us a little about The Silver Witch.

The Silver Witch is set on Llangors Lake near the Brecon Beacons, and takes place in the present day and in the 10th century. Tilda Fordwells, a ceramic artist, moves to the area after the sudden death of her husband. The landscape and the lake seem to spark a dormant power in her. A thousand years earlier Seren the seer, shaman and witch, and lover of a Welsh prince, also lived on the shore of the lake. The book shows how these two women are inextricably linked, and their lives begin to twist and twine together through the story.

2. The Silver Witch is the fourth book in the Shadow Chronicles, the others being The Witch’s Daughter, The Winter Witch and The Midnight Witch. What is the inspiration behind the chronicles? How many more can we expect?

I wanted to explore different types of magic in different historical eras. So far I’ve seen these stories in the 17th century, Victorian London, the First World War, 1830s Wales, Edwardian London, and now Wales in the 10th Century.

The Shadow Chronicles gave me the chance to create a variety of witches, all very different, but all with the common theme of being women of magic. I love the scope and the flexibility this gives me, and of course it is a very real opportunity to write about strong women overcoming obstacles in their lives.

I do plan, though those plans do change. I have a fairly firm idea of the actual story before I start, but I like to see not so much where the words take me, but where the characters take me. There are times when I definitely feel I am following them, rather than the other way around.

I enjoy the freedom of planning less, but it tends to result in a lot more rewriting, which is really the hard work. And I’m basically lazy, so I try to avoid that!

So by the time I actually write the first line I’ve probably already spent a couple of months or so mulling over the plot, growing the characters, and researching both the era and the magic.

I try to be disciplined about the writing itself – there are always deadlines rushing at me! Ideally I’ll write 1,500 – 2,000 words a day, four or five days a week. One day a week is spent on other being-a-writer stuff, such as blogs, interviews, social media in general, setting up signings or events, answering readers’ emails, helping with covers or copy, and so on. Then of course there is usually another book being edited or proof read, another being marketed, and another nascent idea nudging its way into my mind.

I try to get the first full draft written in about seven months. Then the real work begins!

As I am currently writing two series of books, there isn’t a lot of non-writing time! I do the usual Mum things – taking my children to sports stuff, being their taxi driver, helping with homework. I love being in the garden or taking the dog out, but right now the weather is set to be sideways rain for a few weeks. And I read, of course! Lots and lots and lots.

5. If you could only read one book for the rest of your life which book would it be?

Good grief, that surely constitutes some sort of cruel and unusual punishment! Only one, you say? It’s hard to imagine not getting bored eventually. I would be very torn between two books that have had a huge influence on my writing.

The first is Candide by Voltaire. I read this when I was about fifteen and it really made me laugh. I was astonished at how witty and pacy and relevant a book could be to me, a teenager in the 20th century, when it was written by some extraordinary French guy in 1759.

My second choice would be Restoration by Rose Tremain. She is my absolute favourite living writer.  I remember reading this book and thinking, Wow! Imagine being able to write like that! I’ve been trying ever since.

6. I like to end my Q&A’s with the same question so here we go. What question have you not been asked that you wish had been asked – and what’s the answer?

Well, this one had me thinking! It might be that I’d have come up with something different if you’d asked me last month or last year, but recently I was forced to think about this, so….. the question would be:

Who do you write for?

I’ve come to realise that when I am working on a book in a series I do indeed consider my reader. I think it would be impossible not to keep in mind, with each successive book, who was it who read the last one, what did they enjoy about it, and will they get the same kick out of this one? I cannot think of a readership, as such. I can’t write for a mass. It’s much easier to focus on a single, eager, dedicated reader. It’s her (usually her, sorry fellas) I picture curled up in a squashy arm chair, or holding the book in one hand and her baby in another, or hunched over her eReader on the Tube, or listening to the audio book as she runs. And yes, it does influence my writing, because for the book to be complete it needs to have that reader. Otherwise I’m just shouting into the void.

Having said that, when I start out on something new, when I venture into unknown fictional territory, then I am not writing for a reader at all. Nor am I writing for myself. On those occasions I am writing for the story. For the story that is begging to be told, pushing to be born, moving my hands over the keys and setting my brain whirring in the middle of the night.

So thank you readers; my books wouldn’t come to life without you. And thank you stories; without you I’d have nothing to offer my readers!

Thanks for answering my questions and appearing on the blog. 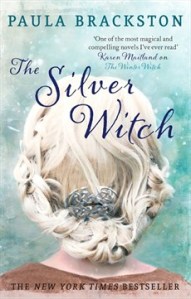 “The Silver Witch is an enchanting tale of love and ancient magic set in the glorious Welsh landscape, past and present.

My mind is like the willow; it flexes and springs. My heart is a knot of oak. Let them try to wound me. Let them try.

One year after artist Tilda Forwells loses her husband, she is finally ready to move into the secluded Welsh cottage they were meant to be sharing together.

In the valley below her mountain home is a mystical lake which inspires a strange energy in her. She starts to experience potent dreams, visions, presentiments which all lead her to Seren, the witch and shaman who legend has it lived on this lakeshore in Celtic times.

As Tilda explores the lake’s powers and her own, her connection to Seren grows stronger. And when she comes under grave threat, she must rely on Seren and this ancient magic to save her.”