So on 30th September I took myself off to London for the day. Not for a random jaunt to see the city that has streets paved with gold. I went to Battersea Park to attend the second day of Capital Crime, the second annual crime writing festival that takes part, as the name suggests, in the capital city.

The first ever Capital Crime took place in 2019 and for reasons everyone knows about, wasn’t held again until this year between 29th September and 1st October. It took place in a new location this year, Battersea Park. After hauling myself over from Kings Cross I took a pleasant stroll to the site. I even managed to see some parakeets which quite frankly made my day. 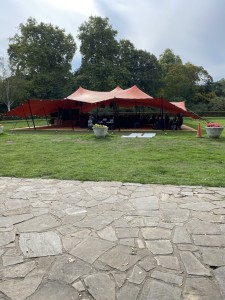 I arrived at little late to join the first panel so I had a wander round, grabbed a crepe from one of the three onsite catering vans and wandered past the bar area to the small but perfectly formed bookshop. Conveniently the signing tent was just outside the bookshop so not to far to stagger under the weight of all those books.

There were two tents, with events on in each at the same time. That meant making some difficult choices as to which panel to attend. But choose I did, and what great panels they were.

The first panel  was Hubble, Bubble, Ghosts and Trouble with Johana Gustawsson, Zoe Somerville and William Ryan, moderated by Anita Frank. The discussion was all things gothic fiction, with Johana discussing her new belle epoque novel, The Bleeding, Zoe talking about her novels The Night of the Flood and The Marsh House, and William forgetting the title of one of his books.

After that it was straight on to the next panel, Brits in the USA, with Will Dean, Erin Young, Chris Whitaker and Mark Edwards, moderated by Tariq Ashkanani. The panellists discussed why they set their novels in the US, (First Born, The Fields, We Begin at the End, No Place to Run and Follow Me to The Edge respectively),  any difficulties they had found along the way and why it was a great excuse for a holiday as “research”. 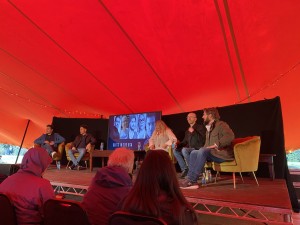 After that it was time to get some books signed and grab a spot of lunch (another crepe, because that one was the shortest queue).

After refuelling it was time for another panel. Brighton Rocks in association with Brighton Gin (sadly there were no bottles of gin on offer. Elly Griffiths, Araminta Hall, Jack Jones and Kate Helm were in conversation with William Shaw. All based in Brighton, the discussion pondered why the seaside location had such a concentration of writers, and of course the panel got to hear about the authors books, and William’s pop up book shop.

The final panel for me was Drama, Tension and Murder Throughout History with Laura Shepherd-Robinson, Abir Mukherjee, Anna Mazzola and Jessica Fellowes, moderated by Suzy Edge. There’s a lot of history to delve into and each author had their own reasons for delving into the past as inspiration for stories, with the added bonus of coming across salacious bits of course. 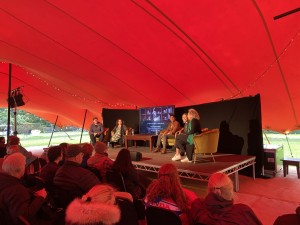 There were more panels left but I decided I had better leave early to make my train (it’s a good job I did too as I ended up walking the wrong way. We’ll call it sight seeing and say no more about it).

As well as seeing all of the brilliant panels I managed to catch up with blogger friends and authors who I either only interact with online or see once at year at Harrogate. It was, all in all, a very good day.

Would I go again? Absolutely. Though I’d make sure to where something waterproof and warm clothes next time, just in case.

Capital Crime will be back in Battersea Park on Thursday 28th September to Saturday 30th September 2023.

*I received a complimentary weekend pass to Capital Crime, though I could only attend one day. I did not receive any other payment and all thoughts on the event are my own*.