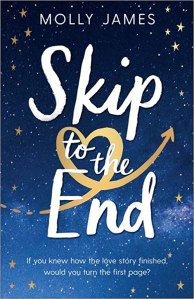 Three kisses. Two break ups. One happy ending…
Amy Daniels has a pretty nice life. Her career is on the up, she loves her friends, and she’s about to buy her very own flat. On a good day, Amy could be described as a catch – so why is she perpetually single?
The trouble is, Amy can see something no one else can: the end. As soon as she kisses someone, she knows, in intimate, vivid detail, how their relationship will end. A screaming argument in the middle of the supermarket over milk. An explicit email sent to the wrong address. A hasty escape through a bathroom window on the second date. At the altar – runaway-bride style. There seems to be no end to the unhappy endings.
After years of trying, and failing, to change a pre-written future, Amy has given up. But then she drunkenly kisses three men at her best friend’s wedding and sees three possible endings: two painful, one perfect. The problem is, Amy can’t really remember who she kissed, and worse, what ending belongs to which person – the only thing she knows for certain is that she’s determined to find out…

Amy’s got herself sorted. A career she enjoys, fabulous friends and she’s about to step on the property ladder. The only thing she doesn’t have is romance. Because Amy has a gift. The first time she kisses someone she has a vision which shows her how the relationship will end. At her friend’s wedding she gets drunk and kisses three men. All she can remember is that two don’t end well but one of them is the one, the relationship that doesn’t end. The only trouble now is figuring out who she kissed and which one is the one.

Amy has to figure out who the men are and then try to discover who she is meant to be with. Usually she knows, so has to go in blind, which leads to fun, mistakes and some self-realisation. There are some very funny scenes, which had me laughing out loud as I read. The reader becomes attached to Amy and her friends and I for one soon discovered who I wanted Amy to find love with. Whilst the destination may have been clear, the fun was in the journey.

I loved the relationship between the five friends. They have grown up together, laughed and cried together and the way they treated each other was a delight. They all know about Amy’s gift and accept it as part of her. They all want her to find her perfect match as much as she does. They also have a lovely relationship with Amy’s mother, who lives in a care home due to early onset Alzheimer’s. The relationship between Amy and her mother is touching, and for Amy, she learns a lot about love from her mother.

I flew through the pages, eager to see if who I imagined was the one for Amy was the actual one. I was soon wrapped up in Amy’s world, which was both hilarious and moving, especially the scenes with her mother.

A funny, entertaining, cuddle in book form. You certainly won’t want to skip to the end.