My True Self by Jessica Huntley was published on 30 October 2021.

Jessica kindly answered a few of my questions.

1. Tell us a little about My True Self.

My True Self is the second book in the My … Self series. It is a psychological thriller about two people sharing the same body. One of these people, Alicia, is a psychopath and she now has full control of the body. Josslyn is now the secondary personality (having been the first in the previous book). After the events of the first book they are still being stalked and seek their revenge on their stalker, now working together rather than against each other. The Hooded Man is also after them, but why … and who is he?

The My … Self series is loosely inspired by the Dexter series by Jeff Lindsay because he talks about having a dark passenger who likes to kill people, and also the You series by Caroline Kepnes, whose main character is a creepy stalker. I wanted the two characters to be in the same body and I wanted to write something with identical twins in it because I’m an identical twin myself. The character names are based on me and my twin sister, Alice.

A bit of both. I start out planning my chapters and then I get a bit lost, so I plan the ending and then the middle bit I sort of make up as I go along! Generally though I let the words flow and the characters develop on their own for the first draft and then write out everything chapter by chapter during the second draft and build it further from there. The second draft is where all the planning gets done. The first draft is just me typing away furiously, trying to get all the ideas and words out of my head and onto the paper.

4. My True Self is the 2nd in the My…Self series. What are the benefits and downsides to writing a series?

The first book, My Dark Self, was originally going to be a standalone novel, but when my friends and my sister read it they begged me to write another book because they loved the two characters so much. The benefits are that my readers definitely grow attached to the characters and grow and develop alongside them. They become emotionally involved and actually really care about what happens to them. I love getting feedback like that. The downside for me at the moment is that I have been solidly writing this series for well over a year now and haven’t been able to focus on anything else. I have so many other book ideas, but I really want to finish this series first, but I know I can’t rush it!

I love reading. I’m a proper book nerd. I read 2 or 3 books at a time and usually around 7 or 8 per month. I’m also a bit of a fitness freak. I enjoy exercise, not just because it keeps me in a good shape, but because I genuinely enjoy it and it makes me feel good. I love spending time with my son, who is 2 and a half and walking my black Labrador dog.

It would have to be Harry Potter and The Half Blood Prince! Love that book so much.

Do you ever find it disheartening as a self-published author to write books, spend a lot of money on them, spend so much time writing and marketing them only for them to be read by merely a handful of people?

Long answer: Yes … however … when I began writing I was only 10 years old. I had massive dreams of being a published author. I decided to go down the self-publishing route many years later at age 31 because I realised that trying to get traditionally published is like trying to find a needle in a haystack. It might happen one day, but I really wanted people to read my books because I wanted to know if I was actually any good. I’m so grateful to every single person who picks up my books and reads them. When I get good reviews and feedback it makes me so happy and spurs me on to keep writing. Yes, I get disheartened sometimes, but my love of writing is what keeps me going. If only one person reads my books and they enjoy them and tell someone else … then it was all worth it. 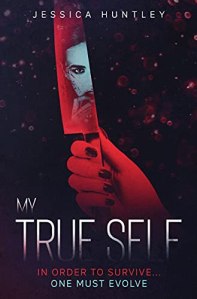 My name is Alicia, and I am a psychopath.

All I want is the chance at a normal life. Josslyn is still in my head, and she has forgiven me … mostly, but my stalker will not leave me alone. Peter has found me, and he is willing to do anything to get Josslyn back.

I know what I must do now. Peter must die if I am ever to be left alone, but things have a way of changing unexpectedly. Everyone is against me … except Josslyn … and for the first time, we must work together to rid ourselves of those that wish us harm.

I am changing. So is Josslyn. But she is changing into someone I never wanted her to be: me.

One day it will end, but first we must fight for our lives.