A (Very) Short History of Life on Earthby Henry Gee was published by St Martin’s Press on 2 November 2021.

Henry kindly answered a few of my questions.

1. Tell us a little about A (Very) Short History of Life on Earth.

It does exactly what it says on the cover. Although the subtitle is ‘4.6 Billion Years in 12 Chapters’ I do throw in an extra billion years at the end, at no extra cost. It’s a very short book – although the UK edition, from Picador, is already quite svelte, the US version, from St Martin’s Press, is small enough to slip in an inside pocket. But the US version says the chapters are ‘pithy’, which might explain this.

Books never really have a single genesis. Although I’d had the idle thought of writing a book on the history of life, I’d never pursued it, and like many such thoughts it was consigned to the back of the shed in the box marked ‘things I’ll probably never get round to doing’. The spark came when a colleague at Nature, David Adam (The Man Who Couldn’t Stop, The Genius Within, both published by Picador) suggested I write a book about all the amazing fossils whose discoveries I’ve had the pleasure of nursing to publication over my more than three decades of service at Nature. If you don’t like the book, blame him. But as I was getting the final idea into shape with my amazing agent Jill Grinberg, I realised that the root inspiration was Sir David Attenborough’s TV series Life On Earth, which galvanised me as a teenager. Without wishing to compare myself with that peerless broadcaster, I wanted to write about the grand sweep of life in a similarly panoramic – even poetic – way. Though entirely in words. As the late, great SF author Iain M. Banks once said, the great thing about writing, rather than filming, is that you have an unlimited SFX budget.

3. Does writing about the history of life need a lot of planning or do you sit down and see where the words take you?

I’m ashamed to say it ran like silk of a spool. As I’ve had the enviable position in the front-row seat of palaeontology as it happens, from my desk at Nature, much of the research I discuss and describe was already familiar to me, and most of the rest came from a lifetime immersed in, reading about, and writing about, the ancient past. If I didn’t know something, I at least had a good idea of where to look. So I guess you could say I didn’t have to write this from a standing start.

4. Is there still anything about the process of publishing a book that surprises you?

Although I have been writing books ever since I finished my doctorate thesis some thirty years ago, and have achieved some modest success, I’ve never had a reception quite as enthusiastic as this. For the first time in my writing career I have a team behind me – not just my agent (who has represented me for more than 20 years, so we know each other very well), but marketing teams on both sides of the Atlantic and a professional PR firm. So, for the first time in my life I’ve had to put in the hours crafting PR material, being interviewed on podcasts, pitching op-ed materials, having magazines run excerpts, and so on. It feels like I’ve been promoted to the Premier League. They say you have to toil in obscurity for decades before you get to be an overnight sensation. It might have come a bit late for me, but I take heart from the fact that The Lord of the Rings wasn’t published until Tolkien was over 60. (I’m 59).

I have a lot of pets so I spend a lot of time walking dogs, giving pedicures to hens, washing cats, and having a friendly wrestle with my pet python. Apart from that I make music. The pandemic put paid to live gigs, so I set up my home studio Flabbey Road and recorded a couple of albums, which are now out on Apple Music. (You can find out more details here http://occamstypewriter.org/cromercrox/music/). The expertise I gained was invaluable when it came to recording the audiobook of A (Very) Short &c &c as well as recording audio for podcasts and so on.

Labyrinths, a book of very short stories and essays by Jorge Luis Borges. This is a translation of his collection Ficciones, with one or two extra bits. It’s only a short book but like most things Borges wrote it is effectively infinite in size.

Q: Who put the Benzedrine in Mrs Murphy’s Ovaltine?

A: Nobody knows the answer. However, it was unlikely to have been Mr Murphy. He was just as puzzled by the appearance of Nembutal in his overalls. 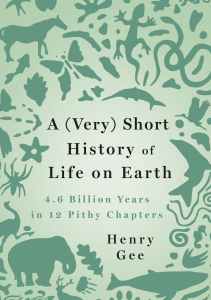 In the beginning, Earth was an inhospitably alien place—in constant chemical flux, covered with churning seas, crafting its landscape through incessant volcanic eruptions. Amid all this tumult and disaster, life began. The earliest living things were no more than membranes stretched across microscopic gaps in rocks, where boiling hot jets of mineral-rich water gushed out from cracks in the ocean floor.

Although these membranes were leaky, the environment within them became different from the raging maelstrom beyond. These havens of order slowly refined the generation of energy, using it to form membrane-bound bubbles that were mostly-faithful copies of their parents—a foamy lather of soap-bubble cells standing as tiny clenched fists, defiant against the lifeless world. Life on this planet has continued in much the same way for millennia, adapting to literally every conceivable setback that living organisms could encounter and thriving, from these humblest beginnings to the thrilling and unlikely story of ourselves.

In A (Very) Short History of Life on Earth, Henry Gee zips through the last 4.6 billion years with infectious enthusiasm and intellectual rigor. Drawing on the very latest scientific understanding and writing in a clear, accessible style, he tells an enlightening tale of survival and persistence that illuminates the delicate balance within which life has always existed.