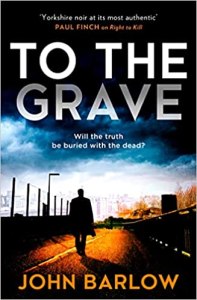 Will the truth be buried with the dead?

There was nothing more he could have done, but that’s cold comfort for Romano. He’s determined to catch Ana’s killer. Although the prime suspect, her millionaire boyfriend, is in a coma.

With the help of his larger-than-life partner Rita Scannon-Aktar, Romano begins to piece together a puzzle that places Ana at the centre of something much bigger than they could have imagined.

But while they’re hunting a murderer, those higher up are more concerned about the money. So it’s up to Romano to get justice for Ana. And whatever she knew, he’ll just have to pray that she didn’t take her secrets to the grave.

DS Joe Romano runs into Ana Dobrescu when he intervenes in an assault at a local pub. He is struck by how nervous she is and when she hints that she is in danger he is determined to help. The next time he sees Ana though she is dead, and his chief suspect in a coma. Joe has to delve more into Ana’s past to find out the real reason she was killed.

This is the second Joe Romano book but the first one I have read. My enjoyment wasn’t spoiled by having not read the first book but there are references to the culprit of that book so it may spoil it a little if you intend to read in order.

I liked that the story was set in Leeds. There’s always something a little bit appealing about being familiar with the area where a story is set.  Yes there is the usual “it’s grim up north” vibe, with the descriptions of the run down areas and the faint feeling of hope lost. But there was also the descriptions of how vibrant the are can be, how beautiful the countryside and the warmth of the people who live there. The characters talk to each other with a familiar jocular tone, gently or not so gently taking the mick but also a sense of family and camaraderie.

The story is engaging. There is obviously something deeper going on that Joe could have imagined and the plot takes the reader on a journey to the darker side of human nature. The clues are there to detect the culprit before the dénouement.

There are a host of characters, central and supporting who round out the story, none are superfluous. There is lots of banter and camaraderie between the officers working with Joe and the other characters all bring something to the story.

An engaging, enjoyable visit to the darker side of life up north.