It’s been a while since I stepped inside my local library. Over two years in fact, I wonder what could have caused that? Anyway, I’ve got myself a new library card, having misplaced my old one and last week I ventured in to see what gems were on the bookcases. I was pleased to see it already busy even though we arrived at opening time. The place, though small, was bustling.

My to be read pile has increased in the two years since I last visited the library so it’s safe to say I probably won’t be running out of books to read in the near future. Or the far future come to that.

I will admit though that I occasionally forget which books are loitering on the bookcase. So I thought I’d start having a rifle through and see what jumped out at me. Sadly for you, inspiration struck and I thought a good way of highlighting them would be looking at older books, newer books and borrowed ones. So the obvious extension was to through in something blue.

So after a rather long hiatus, Old, New, Borrowed, Blue returns. Please try to contain your excitement. 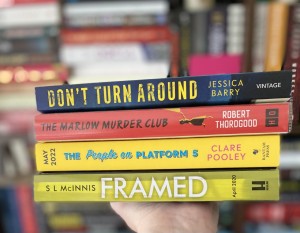 First up an old book from my bookcase, Framed by S L McInnis, published by Headline on 2 April 2020.

It was all fine until she turned up…

Music teacher Beth and film producer Jay seem to have the perfect life together in LA.

But what neither of them know is what Cassie is running from. And that it’s going to have consequences for them all.

Something is about to go very wrong. And someone is going to lie about it.

The new book is so new it’s not even out yet, The People on Platform 5 by Clare Pooley, published by Bantam Press on 26 May 2022.

Nobody speaks to strangers on the train. But what would happen if they did?

Every day at 8:05, Iona Iverson boards the train to go to work. Every day, she sees the same people and makes assumptions about them, even giving them nicknames. But they never speak. Obviously.

Then, one morning, Smart-but-Sexist-Surbiton chokes on a grape right in front of Iona. Suspiciously-Nice-New Malden steps up to help and saves his life, and this one event sparks a chain reaction.

With nothing in common but their commute, an eclectic group of people learn that their assumptions about each other don’t match reality. But when Iona’s life begins to fall apart, will her new friends be there when she needs them most?

I borrowed The Marlow Murder Club by Robert Thorogood, published by HQ on 8 July 2021. 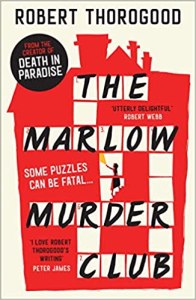 Seventy-seven-year-old Judith Potts is blissfully happy. She lives alone in a faded mansion in Marlow, sets crosswords for The Times, and there’s no man in her life to tell her what to do or how much whisky to drink.

One evening, while out swimming in the Thames, Judith witnesses a brutal murder. When the local police don’t believe her story, Judith and two unlikely friends decide to investigate for themselves. Together, they are the Marlow Murder Club.

But soon another body turns up, and it seems they have a real-life serial killer on their hands. Now the puzzle they set out to solve has become a trap from which they might never escape…

Finally, the blue book plucked from my TBR bookcase this time is Don’t Turn Around by Jessica Barry, published by Vintage on 15 April 2021. 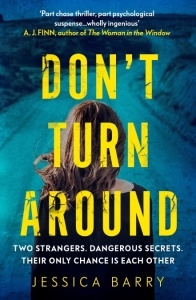 TWO STRANGERS. DANGEROUS SECRETS. THEIR ONLY CHANCE IS EACH OTHER.

Cait’s job is to transport women to safety. Out of respect, she never asks any questions. Like most of the women, Rebecca is trying to escape something.

But what if Rebecca’s secrets put them both in danger? There’s a reason Cait chooses to keep on the road, helping strangers. She has a past of her own, and knows what it’s like to be followed.

And there is someone right behind them, watching their every move…