The first suggestion this time comes from Laura Pashby, author of Little Stories of Your Life, published by Quadrille Publishing on 14 October 2021.

She chose The Faraway Nearby by Rebecca Solnit, published by Granta in ebook on 6 June 2013 and reissued in paperback on 7 July 2022.

Gifts come in many guises. One summer, Rebecca Solnit was bequeathed three boxes of ripening apricots, which lay, mountainous, on her bedroom floor – a windfall, a riddle, an emergency to be dealt with. The fruit came from a neglected tree that her mother, gradually succumbing to memory loss, could no longer tend to. From this unexpected inheritance came stories spun like those of Scheherazade, who used her gifts as a storyteller to change her fate and her listener’s heart.

As she looks back on the year of apricots and emergencies, Solnit weaves her own story into fairytales and the lives of others – the Marquis de Sade, Mary Shelley and Ernesto ‘Che’ Guevara. She tells of unexpected invitations and adventures, from a library of water in Iceland to the depths of the Grand Canyon. She tells of doctors and explorers, monsters and moths. She tells of warmth and coldness, of making art and re-making the self.

“Rebecca Solnit’s The Faraway Nearby is the book that changed how I think about storytelling, and revealed a whole new possible way to write. Solnit’s clear sight, imagination, mastery of language, and ability to weave together varied and sparkling threads of thought and story make this a book to read over and over.”

The second choice comes from Isabel Bannerman, author of The Star-Nosed Mole, published by Pimpernel Press on 23 September 2021.

In the late seventeenth century two penniless young Frenchmen, René Sel and Charles Duquet, arrive in New France. Bound to a feudal lord, a “seigneur,” for three years in exchange for land, they become wood-cutters – barkskins. René suffers extraordinary hardship, oppressed by the forest he is charged with clearing. He is forced to marry a Mi’kmaw woman and their descendants live trapped between two inimical cultures. But Duquet, crafty and ruthless, runs away from the seigneur, becomes a fur trader, then sets up a timber business. Proulx tells the stories of the descendants of Sel and Duquet over three hundred years – their travels across North America, to Europe, China, and New Zealand, under stunningly brutal conditions; the revenge of rivals; accidents; pestilence; Indian attacks; and cultural annihilation. Over and over again, they seize what they can of a presumed infinite resource, leaving the modern-day characters face to face with possible ecological collapse. 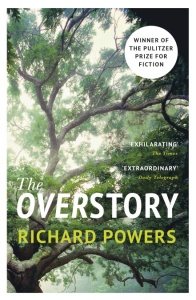 An artist inherits a hundred years of photographic portraits, all of the same doomed American chestnut. A hard-partying undergraduate in the late 1980s electrocutes herself, dies, and is sent back into life by creatures of air and light. A hearing- and speech-impaired scientist discovers that trees are communicating with one another. An Air Force crewmember in the Vietnam War is shot out of the sky, then saved by falling into a banyan.

This is the story of these and five other strangers, each summoned in different ways by the natural world, who are brought together in a last stand to save it from catastrophe.

“The books I would love to suggest to readers who might have missed either are Annie Proulx’s “Barkskins ” which is a novel about the lumber industry on the American continent from about 1600 to 1900 and sort of the prequel to The Overstory which is Richard Powers novelisation of the radical fringes of the tree and natural forest conservation movement of the 1980s and 90s, particularly an amazing campaigner called Julian Butterfly Hill who lived in a giant redwood for over a year to stop it being felling by loggers,  which has all but lost its battle to big industry and greed.  Harrowing tales but very readable and compelling novels.”

So there we have it, three books that had passed me by. Have you read any of them? Do you have a quiet book you’d like to shout about? Do let me know.