So the trick or treaters have been locked back into the dungeon for another twelve months, the nights are definitely getting longer as the clocks fall back an hour and the weather isn’t conducive to being outside traipsing around demanding goods with menaces from the neighbours. It may be windy, wet and miserable outside but that just means it’s perfect weather to get cosied up inside with a book.

Now, there are apparently paper shortages so books may be in short supply in the run up to Christmas. Of course, those rumours could prove to be false but I welcomed a few more books into the house, just to be on the safe side.

October also saw me bid on, and win, my very first auction lot. What did I buy? Books of course. The main reason I bid on the lot was because an old Collins Crime Club edition of The Mirror Crack’d From Side to Side was included. I’ve still not counted how many books I did win, so I’ll estimate 30. What else arrived? Well these: 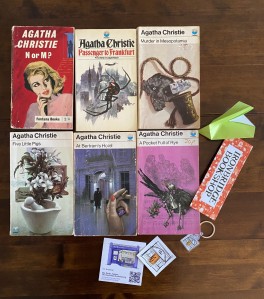 I also ordered a book advent calendar from Coffee and Crime. A further blog post will be dedicated to it but the 12 books that arrived aren’t going to count until December when I open them.

Here’s what I read:

So there we have it, about 60 in and 5 out. Definitely a big lean in one direction. I think November will be quieter for the incoming but then I also think it will be quiet for the outgoing. We shall see!