Nadia Dalbuono is the author of The Few, The American, The Hit and The Extremist. The latest novel in the Leone Scamarcio series, The Devil, was published by Scribe on 12 March 2020.

Nadia kindly answered a few of my questions.

1. Tell us a little about The Devil.

The Devil is about a troubled teenager named Andrea Borghese who is found dead in his parents’ Rome apartment. The last people to see the boy alive were five Catholic priests who had been performing an exorcism on him.

This is the 5th book in the Leone Scamarcio crime series and finds the Detective at a difficult juncture in his life. His partner is expecting their first baby but Scamarcio is worried about becoming a father and the world into which he is bringing his child. When his boss Garramone calls with the Borghesi case, Scamarcio accepts the mission as a welcome distraction.

But the inquiry proves more tangled than he had anticipated and he finds himself investigating occult practices, church corruption, government bribery and pharmaceutical dirty dealings. As he circles closer to the truth, the dangers mount, and when his new little family comes under threat, Scamarcio must decide what he really stands for.

The book was inspired by a magazine article I read about the Vatican’s Chief Exorcist – a real life character named Gabriele Amorth who performed tens of thousands of exorcisms over his sixty years as a priest. He died in 2016.

I used to be a writer who wrote very detailed synopses – this was certainly the case for my first two books but I changed approach with the third and did not have everything planned before I set out. I have yet to decide whether this more organic approach is better or worse. Maybe it is simply different.

4. The Devil is the 5th Leone Scamarcio novel. What are the upsides and pitfalls of writing a series?

The upsides are that you can see your character grow and develop; they become a real person experiencing the ups and downs of life at a rhythm that feels right. The downsides are that in some ways you feel trapped in their world when you would like to try other things. At the moment I am writing a stand-alone novel set outside Italy and far away from Scamarcio as I felt it was time for he and I to take a little break from one another. That said, I hope to return to his world next year.

That is such a good question. Maybe I would go back and reread the Cold Six Thousand by James Ellroy. I found it a fascinating book, so rich in detail that one read wasn’t enough. It is quite a tome so would keep me occupied for a long time I think.

I have never been asked how a writer keeps going psychologically. I think there is an assumption that once you have an agent and a publisher or even an awards nomination you are somehow ‘sorted’. But for me this has not been the case. After my fifth book I really found that I had to muster the same level of determination and self-belief to carry on writing that I needed years ago before I’d even found an agent and a publisher. Writing is a hard game; earnings can be very low and competition is intense and I think you are constantly questioning what you are doing and why you are doing it. For a while last year, I lost my motivation and fell into a rut of inactivity which in itself sparked further feelings of failure. It is only recently that I have come out of it and it has taken a lot of effort. I think it is important that writers are transparent about these things as Twitter seems full of authors announcing their latest TV series deal or bestseller list appearance which can leave a lot of us feeling pretty inadequate at times. I wish there was a bit more honesty about the other, darker side of this writing life. 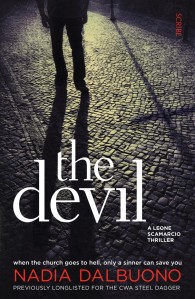 When Leone Scamarcio investigates the murder of a boy with demonic possession, who will win: Scamarcio or the Devil?

When Detective Leone Scamarcio is called to investigate the death of a young man in Rome, he soon finds himself at the centre of a conspiracy involving occult practices, murder, church and government corruption, pharmaceutical dirty dealings, family secrets, and, of course, his old friends, the Mafia.

As he circles closer to the truth, the danger mounts, and when his family comes under threat, Leone Scamarcio will have to decide once and for all what he really stands for.

You can buy The Devil here. (Please note this is an affiliate link. I may earn a few pence if you buy the book from here. Other retailers are available.)