Invisible Sun, the final book in the Empire Games trilogy by Charles Stross is published by Tor on 30 September 2021.

To celebrate, Black Crow PR have offered me a full set of the trilogy to give away.

The first book in the trilogy, Empire Games, was published on 19 October 2017.

A time of ambition, treachery and dangerous secrets . . .

Rita Douglas is plucked from her dead-end job and trained as a reluctant US spy. All because she has the latent genetic talent to hop between alternate timelines – and infiltrate them. Her United States is waging a high-tech war, targeting assassins who can move between worlds to deliver death on a mass scale, and Rita will be their secret weapon.

Miriam Beckstein has her own mission, as a politician in an industrial revolution North America. She must accelerate her world’s technology before their paranoid American twin finds them. It would blow them to hell. After all, they’ve done it before. Each timeline also battles internal conspiracies, as a cold war threatens to turn white hot. But which world is the aggressor – and will Rita have to choose a side?

The second book in the trilogy, Dark State, was published on 11 January 2018.

In the near future, the collision of two nuclear superpowers – in two different timelines – is imminent. One America is experiencing its first technological revolution, whilst a parallel United States is a hi-tech police state. But both are poised to wreak destruction.

In Miriam Burgeson’s America, internal politics are pulling the government apart. But if one of her agents secures a high-profile defection, civil war may be averted. Rita Douglas, rival US spy, arrives during this crisis. Her world is rocked when she realizes Miriam is her mother, who gave her up for adoption as a baby. But what impact will this have on the conflict?

Then the US discovers another timeline, and the remains of an advanced society. Something annihilated that civilization – and Rita’s people are about to rouse it. 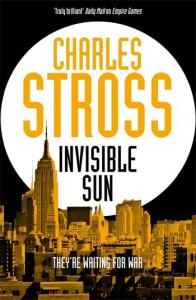 The New American Commonwealth is caught in a deadly arms race with the USA, its parallel-world rival. And the USA’s technology is decades ahead. Yet the Commonweath might self-combust first – for its leader has just died, leaving a crippling power vacuum. Minister Miriam Burgeson must face allegations of treason without his support, in a power grab by her oldest adversary.

However, all factions soon confront a far greater danger . . . In their drive to explore other timelines, high-tech USA awakened an alien threat. This force destroyed humanity on one version of Earth. And if the two superpowers don’t take action, it will do the same to them.

To be in with a chance of winning, please leave a comment. You can also find the giveaway over on Twitter.

*Giveaway is UK only. The prize comes direct from Black Crow and neither I nor Black Crow accept any liability if the prize is lost or stolen en route. No cash alternative. Closes midnight Friday 1 October 2021.*

Charles Stross was born in Leeds, England, in 1964. He has worked as a pharmacist, software engineer and freelance journalist, but now writes full-time. To date, Stross has won two Hugo awards and been nominated twelve times. He has also won the Locus Award for Best Novel, the Locus Award for Best Novella and has been shortlisted for the Arthur C. Clarke and Nebula Awards. He is the author of the popular Merchant Princes and Empire Games series, set in the same world. In addition, his fiction has been translated into around a dozen languages. Stross lives in Edinburgh, Scotland, with his wife Feorag, a couple of cats, several thousand books, and an ever-changing herd of obsolescent computers.