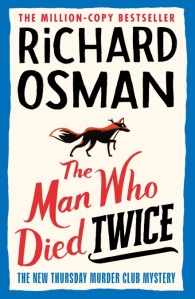 Elizabeth has received a letter from an old colleague, a man with whom she has a long history. He’s made a big mistake, and he needs her help. His story involves stolen diamonds, a violent mobster, and a very real threat to his life.

As bodies start piling up, Elizabeth enlists Joyce, Ibrahim and Ron in the hunt for a ruthless murderer. And if they find the diamonds too? Well, wouldn’t that be a bonus?

But this time they are up against an enemy who wouldn’t bat an eyelid at knocking off four septuagenarians. Can the Thursday Murder Club find the killer (and the diamonds) before the killer finds them?

After solving a couple of murders, the members of The Thursday Murder Club are back to ruminating on cold cases in the comfort of the Jigsaw room at Cooper’s Chase retirement village. Until an ex-colleague of Elizabeth’s turns up with a tale of investigating a man who acts as criminal go-between for the major crime syndicates of the world and a few million pounds worth of missing diamonds. Elizabeth and the gang are soon drawn into the world of espionage (again, in Elizabeth’s case) and murder. Well as Joyce would say, it’s better than re-runs of The Antiques Roadshow.

Now Richard Osman doesn’t need me to review his book to persuade people to buy it. He doesn’t really need anyone to write a review to persuade people to buy it. It will be sold, many, many times without the need for publicity. I’m not even here to tell you that you should read it. Reading is subjective and what I may like may be exactly what puts you off a book. But that, there, is the point of reviews. To let readers, and potential readers, figure out if a book is for them.

So what did I make of The Man Who Died Twice? Well simply put, I had a fabulous time reading it. It is funny, with a comedic tone that is simple in it’s methods, slightly acerbic and done with a lightness of touch. It is obvious that Richard Osman had fun writing the book, that comes through on every page. There are many lines that had me laughing out loud, some returning to me hours later and still making me chuckle.

One of the great aspects of the book is the theme of friendship. Ibrahim, Ron, Joyce and Elizabeth are a disparate group of people. When younger it’s unlikely that a psychologist, a nurse, a union rep and a spy would have hung around together, yet these four are cohesive group. Elizabeth realises that she’s never really had friends before, had people want to be with her and help her simply because they like her. It’s taken her nearly 80 years to realise she likes it. There are also the great relationships between police officers Donna and Chris, with Chris discovering the joys of dating and Donna, more sadly realising that a group of near Octogenarians and an overweight, middle age detective solely make up her social circle. Touching too, in its own way, is the relationship with Bogdan and Steven, Elizabeth’s husband. The burly Polish builder and former fixer is always there to help Elizabeth, spending time without question with Stephen who slowly succumbs to dementia. Another lovely relationship to discover is that of Ibrahim and Kendrick, Ron’s young grandson. The two spend plenty of time together, having lovely little chats, with the young boy helping the older man far more than he knows.

The mystery itself is engaging. Douglas, Elizabeth’s former husband and fellow spy, turns up hiding in Cooper’s Chase retirement village, having happened to find himself in a fix when he steals £20 million worth of diamonds from a criminal intermediary. Diamonds that happen to belong to the mafia who would like them back, thank you very much. Of course things never go to plan, what with young offenders to bring to justice and a lovestruck drugs dealer to content with. Some people take up tai chi or bowling to keep them young at heart. Others investigate killings and spies gone rogue. Different strokes and all that.

Inevitably people start to die, well it is The Thursday Murder Club, and so Elizabeth and her friends, with a little help from the police and MI5, have to figure out who is behind the trigger, and of course try to find the diamonds whilst they are at it.

I had such fun shadowing The Thursday Murder Club as they teared here, there and even to Antwerp, on their quest to track down the truth. Yes it’s silly but it’s also very witty, and makes a more important, yet gentle, point about how society can seem to write off people as they age, forgetting they still have so much to offer, and so much life still to live. There’s life in the old dogs yet (and even in the old dog, as Joyce sets her heart on adopting Alan, a dog that Ibrahim says no one else would be silly enough to adopt). Book Three has already been announced. I’m already looking forward to the resumption of The Thursday Murder Club meetings.