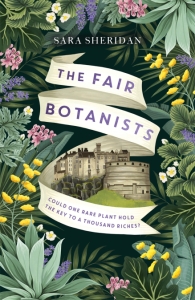 Could one rare plant hold the key to a thousand riches?

It’s the summer of 1822 and Edinburgh is abuzz with rumours of King George IV’s impending visit. In botanical circles, however, a different kind of excitement has gripped the city. In the newly-installed Botanic Garden, the Agave Americana plant looks set to flower – an event that only occurs once every few decades.

When newly widowed Elizabeth arrives in Edinburgh to live with her late husband’s aunt Clementina, she’s determined to put her unhappy past in London behind her. As she settles into her new home, she becomes fascinated by the beautiful Botanic Garden which borders the grand house and offers her services as an artist to record the rare plant’s impending bloom. In this pursuit, she meets Belle Brodie, a vivacious young woman with a passion for botany and the lucrative, dark art of perfume creation.

Belle is determined to keep both her real identity and the reason for her interest the Garden secret from her new friend. But as Elizabeth and Belle are about to discover, secrets don’t last long in this Enlightenment city . . .

And when they are revealed, they can carry the greatest of consequences.

Elizabeth, newly widowed and carrying the secret of her unhappy marriage, has come to Edinburgh to live with her husband’s aunt, a woman she has never met. Her arrival coincides with the opening of the new botanical garden that borders her new home. She soon meets the head gardener and offers to draw the plants, in particular a rare Agave Americana plant, that blooms only once every thirty years, a bloom that is due at any moment. At the gardens she meets Belle Brodie. The two become friends but Elizabeth isn’t aware of the true identity of Belle, and her real interest in the plant. But as the plant is about to reveal its flowers, secrets are also about to be revealed that could change everything.

As soon as I picked up The Fair Botanist and started to read, I was transported back in time to 1822 and an Edinburgh on the cusp of change.  I loved the sense of place portrayed in the book. There was the feeling of Edinburgh on the edge, new developments, resisted somewhat by the residents, transforming the city into what it is today.

Both women are very different, but drawn to each other through their shared interest in the plants but also perhaps through some instinctive knowledge that each of them were lonely in their own way. Elizabeth is living with relatives she hardly knows, believes she is there through family duty. She has to keep the secret of her unhappy marriage from her husband’s relatives, though more and more is revealed about her life before. Belle is a social outcast, though not without money. The illegitimate child of a peer, she has chosen to live her life as a courtesan, a mistress to two men of wealth. Her position has meant she has never really had friends and she is surprised to find she welcome’s Elizabeth’s company.

The transporting of the trees from the site of the old gardens to the new botanical garden is a wonder to the population. No mean feat of engineering, the spectacle would have been some sight to see for the residents of Edinburgh and it’s easy to imagine the carts rolling down the streets, giant roots for all to see.

It is also easy to imagine the wonder that the agave plant would instil. Even now, a plant that only flowers every thirty years or so is something to be marvelled at. In the 1800s it would have been fantastic, especially as photographic evidence wouldn’t have been available for all to see. Elizabeth sees the plant and the gardens as her way of integrating with society, of feeling useful and productive. It is the calm after the storm of her marriage and sudden widowhood. For Belle, the plant is her ticket to financial freedom, to ridding herself of her courtesan role. It’s the key to success as a parfumier and a better social standing. For others, it means more. A key to opening royal doors perhaps or putting food on the table. The plant is the centre around which the other lives revolve.

Entertaining, with just the right sense of place, I thoroughly enjoyed my travel back in time to an Edinburgh on the verge of a rebirth.

Sara Sheridan is an Edinburgh-based writer of over 20 books including cosy crime noir mysteries set in 1950s Britain and historical novels based on the real-life stories of late Georgian and early Victorian explorers. She has also written non-fiction, as well as books for children. Sara has been named one of the Saltire Society’s 365 most influential Scottish women, past and present.