The Abdication by Justin Newland was published by Matador on 6 July 2021.

Tula followed Musa until he stopped at the entrance to an alley by the side of the market square. The rioters had dispersed. A man was lighting the wicker lanterns on cradles perched around the square, bringing light to the darkness and hope to despair. Near the Bell Tower, another man was handing out spades and brooms from the back of a donkey cart.

“Now, Miss,” Musa said. “I got to go find Rufus and then get to my post. But before that, I want to see you’re safe and well tonight.”

On her journey here, she had slept in many towns. In the absence of a deserted house, a stable or a barn, she would slide into a deserted soldier’s hut or, as a last resort, sleep curled up in a shop front. Tonight, she feared exposure in such a lawless, desperate place.

Warmed by his offer of help, she replied, “Thank you, Musa. I don’t have much money. Where can I stay tonight?”

“I wish I could help, Miss, I really do,” he said. “’Cos of the riot, all us guards got a double shift. And you shouldn’t be out at night, no, that’s not right at all, not a pretty, young girl like you.”

She blushed deeply and, to hide it, pretended to look for something in her knapsack.

“But look, you could try the Miners’ Inn. It’s cheap. It fits the bill. It’s just down here,” he added, pointing to the alley.

“Oh, Musa. Thank you so much. I’ll not forget your kindness.”

“I hope to see you again soon and now I’ll be takin’ my leave.”

“Until the next time,” she murmured.

“Oh, I’m already lookin’ forward to it. Keep safe out there, Miss Tula,” he said with a beguiling wink and marched off across the market square. She was impressed; he had even remembered her name.

The crows’ evening squawks seemed louder and their cries eerier than before. From around the corner, she caught the whiff of a vagabond. Another shuffled by her, his eyes shifty, his back hunched, his clothes tattered. She was a stranger in their eyes, as they were in hers. At the far end of the square, two guards were rounding up the strays.

Her quest to meet the angels in Unity had brought her this far and she was not going to abandon it. She refused to believe the prevailing dogma about the bridge devils. Despite that, Jevros’s death had chilled her to the bone. As had the shocking news that he had carried his dead child to his grave.

Tula was so near and yet so far from realising her dream. She shoved her hands in her pockets and found the bridge key. She had forgotten it was there. So, even at this late hour, she could sneak down the snake path, unlock the gate and skip over the bridge. She quivered at the prospect of passing the lowest point in the bridge arc from where Jevros had launched himself into the skies. Or had something launched him? Whatever had despatched Jevros might be waiting for her, lurking in the gloom, marauding amidst an airy expanse of nothing.

And Geb had said it was the doctor’s key. A dead man’s key. She banished that line of thought. Intending to return the key in the morning, she put it back in her pocket. Until she could cross the bridge – safely and preferably in daylight – she would stay in Topeth.

Stalking the market square was a sense of doom that chilled her to the bone. Her breathing was laboured, and the plaintive cries of the rioters resounded in her ears. The air was shot with the smell of vegetable matter thrown by the rioters. Some workers were sweeping up shards of glass and stones. Another group struggled by the light of a lantern to board up the broken windows. Guards cleaned up the rotten vegetables, cursing at the stench.

To one side of the square, a beacon was swinging in the late evening breeze, casting a gloom between the narrow walls of the alley. That was where Musa had pointed. She poked her nose down the alley. Goosebumps rose on her arms. Up ahead, two people flitted between the shadows. With her back to the wall, she edged through the darkness, trying to keep out of their sight. She had to be careful because her knapsack and swollen ankle would prevent a quick escape.

Two young men were shouting at another young man, who was cowering in the shadowy corner of a shop entrance.

“Stupid dolt, you’re the thickest boy in Topeth,” one of the young men cried, shaking his fist at the cornered lad, who hid his face behind his hands.

Without a moment’s hesitation, she confronted them.

“Hey, you lads! What do you think you’re doing?” She puffed out her chest. Or at least what little there was of it.

The two lurched at her. She backed against the alley wall. Nowhere else to go. No one around. Her heart thumped inside her chest. When she needed protection, where was Musa?

“I am.” She mustered every shred of defiance.

“What you gonna do about it, little cub?” said the other. He was the same young man who had led the mob in the market square.

Despite trembling legs, she forced herself to stand tall. “Leave him alone.”

“What we gonna do with ’er, Taurus?” the first one asked.

Taurus snapped at his friend, “Shut it, will you? Now she knows me name.”

Her throat dried and her palms moistened. On her journey, she had encountered some awkward moments, but none as threatening as this.

“Get on with you!” she yelled.

She had them on the run. “I mean it,” she added, brandishing her walking stick.

“Oh, watch out, she’s got… a walking stick,” Taurus said. He sniggered, chuckled, and then doubled over, howling with laughter.

She hissed with fury and was about to give him a wallop when, opposite them, a door flung open, spilling a tranche of light into the alley. A group of men lurched out of an inn, howling, punching the air, singing a bawdy melody. Taurus and his mate were as surprised as she was. With their false courage punctured, the two of them ran off into the gathering dusk.

Turning the air blue with their song, the men lumbered down the alley, barely giving her, or the young men, a second glance. For probably the only time in her life, she mouthed a prayer of thanks to an unruly bunch of drunks. 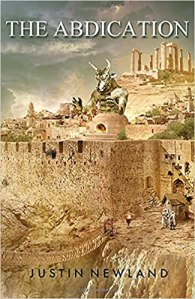 The town of Unity sits perched on the edge of a yawning ravine where, long ago, a charisma of angels provided spiritual succour to a fledgeling human race. Then mankind was granted the gift of free will and had to find its own way, albeit with the guidance of the angels. The people’s first conscious act was to make an exodus from Unity. They built a rope bridge across the ravine and founded the town of Topeth. For a time, the union between the people of Topeth and the angels of Unity was one of mutual benefit. After that early spring advance, there had been a torrid decline in which mankind’s development resembled a crumpled, fading autumnal leaf.

Following the promptings of an inner voice, Tula, a young woman from the city, trudges into Topeth. Her quest is to abide with the angels and thereby discover the right and proper exercise of free will. To do that, she has to cross the bridge – and overcome her vertigo. Topeth is in upheaval; the townsfolk blame the death of a child on dust from the nearby copper mines. The priests have convinced them that a horde of devils have thrown the angels out of Unity and now occupy the bridge, possessing anyone who trespasses on it. Then there’s the heinous Temple of Moloch!

The Abdication is the story of Tula’s endeavour to step upon the path of a destiny far greater than she could ever have imagined.

Justin Newland is an author of historical fantasy and secret history thrillers – that’s history with a supernatural twist. His stories feature known events and real people from history which are re-told and examined through the lens of the supernatural. He gives author talks and is a regular contributor to BBC Radio Bristol’s Thought for the Day. He lives with his partner in plain sight of the Mendip Hills in Somerset, Englan