I have many, many books to read, dotted (someone who will not be named would say littered) about the house and not enough time to read them in. Sometimes I agree to review a book by a certain date so I have to stop reading a book I have started and crack on with another. The idea is to go back the former book once I’ve finished but the road to hell is littered with good intentions. I’m very much a mood reader and often my mood will have changed by the time I’ve finished the deadline book. Or another one will have arrived that catches my attention. Or I will have forgotten which book I was reading before.

Now this doesn’t mean I won’t ever read the temporarily abandoned books. These aren’t books I DNF (do not finish) because I’ve not been enjoying them.  I never used to give up on books, ploughing on through until the end. Now I’ve given myself permission to jack it in if I’m not enjoying it, I find I’m far happier (and far less resentful towards the books). These are books, I want to finish but for some reason or another I’ve just not yet turned the final page.

So I’ve had a quick glance at my bookshelves and here are a few books I’m part way through and want to finish, hopefully sooner rather than later.

Paris by the Book by Liam Callanan

In a city of millions, it’s easy to lose someone…

Twelve weeks before Leah Eady arrived in France, her husband disappeared. Early one morning, he walked out the door and never came back. All he left behind was a scrumpled note in a cereal box, leading her to the bustling streets of Paris.

Once she arrives, she discovers a mysterious unfinished manuscript written by her husband, and set in the very same city. Hoping to uncover more clues, Leah takes over a crumbling bookshop with her two young daughters, only to realise that he might just be closer than any of them ever imagined…

…but what if he doesn’t want to be found?

The House of Birds by Morgan McCarthy

Oliver has spent years trying to convince himself that he’s suited to a life of money making in the city, and that he doesn’t miss a childhood spent in pursuit of mystery, when he cycled around the cobbled lanes of Oxford, exploring its most intriguing corners.

When his girlfriend Kate inherits a derelict house – and a fierce family feud – she’s determined to strip it, sell it and move on. For Oliver though, the house has an allure, and amongst the shelves of discarded, leather bound and gilded volumes, he discovers one that conceals a hidden diary from the 1920s.

So begins a quest: to discover the identity of the author, Sophia Louis. It is a portrait of war and marriage, isolation and longing and a story that will shape the future of the abandoned house – and of Oliver – forever.

Pieces of Happiness by Anne Ostby

When recently-widowed Kat writes to her four old school friends, inviting them to live with her on a cocoa plantation in the South Pacific, they swap icy pavements and TV dinners for a tropical breeze and an azure-blue ocean. Leaving behind loneliness, dead-end jobs and marriages that have gone sour, they settle into the Women’s House, surrounded by palms and cocoa trees; and locals with the puzzling habit of exploding into laughter for no discernible reason.

Each of the women has her issues to resolve, and secrets to keep. But together the friends find a new purpose, starting a business making chocolate: bittersweet, succulent pieces of happiness. As they embrace a new culture that views ageing so differently from their own, will they learn to accept and forgive: to discover the value of friendship, and a better way to live?

Lapérouse leaves France in the Spring of 1785 with two ships under his command, knowing that he sails with the full backing of the French government. This is to be a voyage of scientific and geographical discovery – but every person on board has their own hopes, ambitions and dreams.

As the ships move across vast distances in their journey of nearly four years, the different characters step forward and invite us into their world. From the remote Alaskan bay where a dreadful tragedy unfolds, to the wild journey Barthélemy de Lessups undertakes from the far east of Russia to St Petersburg, the reader is irresistibly drawn into a extraordinarily vivid world. 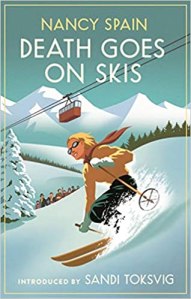 Miriam Birdseye is daring, brilliant – and a long way from The Ivy. Our dashing heroine, a famous revue artist, takes to the slopes with her coterie of admirers. Champagne flows and wherever Miriam goes she leaves a trail of gossip in her wake.

Fellow ski-resort guests include the celebrated Russian ex-ballerina, Natasha Nevkorina, whose beauty is matched only by her languor, Natasha’s burly husband, nightclub owner Johnny DuVivien, and the wealthy Flahertés, a family who have made their money importing scents: handsome playboy Barney, his wife Regan, their two obnoxious children and the governess, Rosalie. Unbeknownst to Regan, Barney’s mistress, a film star, is also there with her husband.

When secrets start to unravel, tensions rise, and soon amateur sleuths Miriam and Natasha have not one but two murders to solve. In the hands of Nancy Spain, for whom farce and humour are a lot more fun than a conventional detective novel, the result is a deliciously wild ride.

The Little Snake by A. L. Kennedy

This is the story of Mary, a young girl born in a beautiful city full of rose gardens and fluttering kites. When she is still very small, Mary meets Lanmo, a shining golden snake, who becomes her very best friend.

The snake visits Mary many times, he sees her grow and her city change, as bombs drop and war creeps in. Lanmo wonders, can having a friend possibly be worth the pain of knowing you will lose them?

The Christmas Egg by Mary Kelly

London. 22nd December. Chief Inspector Brett Nightingale and Sergeant Beddoes have been called to a gloomy flat off Islington High Street. An elderly woman lies dead on the bed, and her trunk has been looted. The woman is Princess Olga Karukhin – an emigrant of Civil War Russia – and her trunk is missing its glittering treasure…

Out in the dizzying neon and festive chaos of the capital a colourful cast of suspects abound: the downtrodden grandson, a plutocratic jeweller, Bolsheviks with unfinished business? Beddoes and Nightingale have their work cut out in this tightly-paced, quirky and highly enjoyable jewel of the mystery genre.

A Gentleman in Moscow by Amor Towles

On 21 June 1922, Count Alexander Rostov – recipient of the Order of Saint Andrew, member of the Jockey Club, Master of the Hunt – is escorted out of the Kremlin, across Red Square and through the elegant revolving doors of the Hotel Metropol.

Deemed an unrepentant aristocrat by a Bolshevik tribunal, the Count has been sentenced to house arrest indefinitely. But instead of his usual suite, he must now live in an attic room while Russia undergoes decades of tumultuous upheaval.

Can a life without luxury be the richest of all? 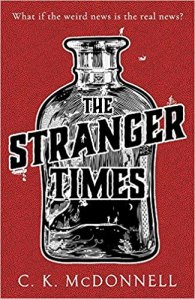 There are dark forces at work in our world (and in Manchester in particular), so thank God The Stranger Times is on hand to report them . . .

A weekly newspaper dedicated to the weird and the wonderful (but mostly the weird), it is the go-to publication for the unexplained and inexplicable.

At least that’s their pitch. The reality is rather less auspicious. Their editor is a drunken, foul-tempered and foul-mouthed husk of a man who thinks little of the publication he edits. His staff are a ragtag group of misfits. And as for the assistant editor . . . well, that job is a revolving door – and it has just revolved to reveal Hannah Willis, who’s got problems of her own.

When tragedy strikes in her first week on the job The Stranger Times is forced to do some serious investigating. What they discover leads to a shocking realisation: some of the stories they’d previously dismissed as nonsense are in fact terrifyingly real. Soon they come face-to-face with darker forces than they could ever have imagined.

Here is the Beehive by Sarah Crossan

For three years, Ana has been consumed by an affair with Connor, a client at her law firm. Their love has been consigned to hotel rooms and dark corners of pubs, keeping their relationship hidden from the world. So the morning that Ana’s company receives a call to say that Connor is dead, her secret grief has nowhere to go. Desperate for an outlet, Ana seeks out the shadowy figure who has always stood just beyond her reach – Connor’s wife Rebecca. 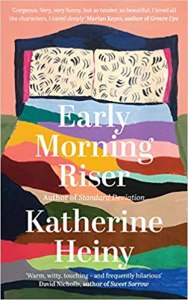 Jane easily falls in love with Duncan: he’s charming, good-natured, and handsome. He has also slept with nearly every woman in Boyne City, Michigan.

Jane sees Duncan’s old girlfriends everywhere – at restaurants, at the grocery store, even three towns away. While she may be able to come to terms with dating the world’s most prolific seducer of women, she wishes she didn’t have to share him quite so widely. His ex-wife, Aggie, still has Duncan mow her lawn. And his coworker Jimmy comes and goes from Duncan’s apartment at the most inopportune times. Jane wonders how the relationship is supposed to work with all these people in it. But any notion Jane has of love and marriage changes with one tragic accident. Now her life is permanently intertwined with Duncan’s, Aggie’s, and Jimmy’s, and she knows she will never have Duncan to herself. But is it possible that a deeper kind of happiness is right in front of her eyes?

Violette Toussaint is the caretaker at a cemetery in a small town in Bourgogne. Her life is lived to the predictable rhythms of the often funny, always moving confidences that casual mourners, regular visitors, and sundry colleagues share with her. Violette’s routine is disrupted one day by the arrival of Julien Sole—local police chief—who has come to scatter the ashes of his recently deceased mother on the gravesite of a complete stranger. It soon becomes clear that Julien’s inexplicable gesture is intertwined with Violette’s own complicated past.

I shall certainly be picking up one of these in the next week or so as I’m keen to get back to them.

Have you read any? Do you have a suggestion as to which to finish first? Do let me know.