Julie Houston’s books include A Village Affair,  A Village Vacancy, Coming Home to Holly Close Farm and Sing Me a Secret. Her latest novel, A Family Affair, was published by Aria Fiction on 3 June 2021.

Julie kindly answered a few of my questions.

1. Tell us a little about A Family Affair.

A Family Affair is told through both Frankie Piccione’s and her Aunt Pam’s viewpoints. It is a story of how migrants from both Sicily and India worked hard in their new country, overcoming prejudice to start new companies and do exceptionally well. It is the story of a young girl overcoming the restraints and prejudices of being female in the 1970s and also tells of both Frankie’s and Pam’s passion for the men they know is their one and only. Perhaps not as much humour as earlier books, I hope there are scenes that will still raise a smile.

When I sat down in front of a blank screen on the eve of the very first lockdown last March, I didn’t have a clue where this book was going. I didn’t have a plan and certainly not a title. I knew I wanted to write something about a mythical company that had been going for several generations here in the town, but also something about Northern soul music. And then it came to me: why didn’t I incorporate my own Italian heritage? My grandmother was born Madeleine Scaramuzza, daughter of Antonio who had left Naples to find work in the woollen mills in the area. So, I went straight down to Sicilian friends of mine armed with paper and pad and the plot sort of took off. I loved writing this book. I’d just watched the film Lion with Dev Patel and, basically, I wrote the character of Dr Daler Dosanjh with Dev totally in mind. So, my inspiration was a combination of my own Italian ancestry, my own love of Northern soul as a teenager and Dev Patel!

I never really used to plan much, but now I’m onto my eleventh book, I sit down and plan for a long time. I draw family trees, work out each character’s history and where I want them to go. Inevitably the characters take over and lead me into unexpected and unchartered territory. I used to scoff at the notion of the characters writing the book themselves, but I really do find that they take over and take themselves to where they want to be.

I’m always a bit surprised at how long it all takes. A book may take me eight months to write and yet I’ll have to forget about the characters I’ve grown to love and abandon them for the next book, and even the one after that, before these original characters see the light of day. Once I’ve written a book it goes off to my agent who, as a previous commissioning editor, goes straight into it with line edits. Then back to me, then on to my editor at Head of Zeus. More edits -possibly structural at this stage. Then onto the copy editor. Then on to the proof reader. Do we change the front cover? Change the title back to what it originally was? And so on.

I think the nicest surprise has been in realising just how supportive and thoroughly nice the blogging community – as well as readers themselves – has been.

I’m pretty busy as I still do supply teaching when the phone rings. I’m also a magistrate which takes up quite a bit of time. Both my kids are now in London so I get down there whenever I can. Apart from that we entertain a lot – I love having people for a big Sunday lunch – and I run and walk the dog most days. And now that the gyms are open once more, I’m back swimming again.

No one has ever asked whether writing is a hobby or a job. Like reading, writing has always been something I’ve just done. I won my first writing prize when I was eight – enough cash to buy a new pair of ballet shoes. From the age of fourteen when all that teenage angst (and not being allowed to go to clubs dedicated to Northern Soul) needed an outlet, I wrote a diary. A huge A4 page-a-day diary with typical outpourings on family, school and boys. Diary writing went on well into my late twenties when I was living in New Zealand, but dwindled to nothing when time was scarce bringing up young children. So, the answer to my own question is that writing started as a hobby but now, with contracts to fulfil and deadlines to achieve, it’s very much a job. I was going to say like any other, but it’s not. I’m sitting here at my desk with the doors open onto a glorious view and while writing is now a job, it’s not one I would want to swap with any other. (Unless it was personal assistant to Dev Patel!) 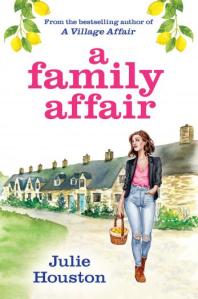 Frankie Piccione is done running away from her responsibilities – well, for now, anyway. Two years after fleeing Westenbury with a shattered heart, it’s time to return and take up her place on the board of the family business. Piccione’s Pickles and Preserves is floundering, and Frankie knows she can turn it around.

But with her brother Luca and the new, rather attractive, Cameron Mancini watching her every move, she’s going to have to come up with something special to persuade them that she belongs on the board just as much as they do.

With the help of her Aunt Pam and best friend Daisy, Frankie begins to thrive with her new sense of purpose. Until someone from her past walks right back into her life and threatens to ruin everything…