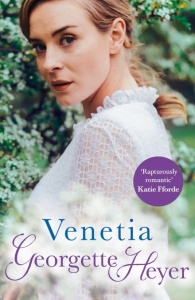 In all her twenty-five years, Venetia Lanyon has never been further than Harrogate.

Nor has she enjoyed the attentions of any man aside from her two wearisomely persistent suitors.

Then, in one extraordinary encounter, she meets a neighbour she only knew by reputation – the infamous Jasper Damerel.

Before she realises it, Venetia is encouraging a man whose way of life has scandalised the North Riding for years.

Venetia Lanyon has never made it further than York and Harrogate. Her father refused to let her come out at Court, she has, since his death and her elder brother’s enrolment in the army, been keeping house with her younger brother and managing the affairs of Undershaw, the family home. And then into her life gallops Jasper Damerel, lord of the nearby Priory. With a reputation as a ne’er do well and cad, he is rumoured to have squandered his fortune and left a trail of broken hearts, and broken women behind him. In him Venetia sees the future has possibilities. But will that future be hers?

I had heard many people over the years say how much they loved Georgette Heyer’s work. I’d seen discussions over which book was best and various suggestions of where to start. After seeing so much talk I knew I had to pick up one of her books. It was just which one. Seeing the description of Venetia, and being a Yorkshire resident, I knew this was the one to start with.

Venetia is a lovely character. Kind, considerate of her family and her staff, she is not afraid to show her own mind. She is aware of her brothers character flaws but geninely adores Aubrey, her younger brother. She deals with conflicts between the staff with the manner of a well used mediator and she is content enough in her life in the country. Aware she will either have to marry Edward Yardley or remain a spinster aunt to her elder brother’s yet to be conceived children she hopes for a third way out by keeping house with Aubrey. Then she meets Jasper Damerel and those plans are abandoned. She finds herself a friend in Jasper, someone who challenges her but perhaps reflects some of her own dreams.

Jasper Damerel is a rake. He’s a cad and a bounder and the mere turn of his gaze upon a young lady is enough to damage her reputation for life. Or at least that is the rumour that goes around the neighbourhood. (Though really I blame his parents. With a name like Jasper Damerel he was bound to turn out as rake). He does however find something in Venetia that was lacking in his life before. He is of course charmed by her, but he is determined that she should not have her reputation, or her life, ruined by a connection to him.

The book looks at the role of women in society and in relationships. Venetia is frowned upon because she proposes to keep house by herself, or at least with her brother Aubrey. It was unheard of and looked upon with disdain that such expressions of independence were uttered. She is expected to either marry or to remain in her family home once her elder brother marries. Venetia wishes to marry for love, or at least not marry the only two men who pay her attention; the staid Edward and the impetuous Oswald. Divorce is tantamount to a deadly sin. Damerel gained his reputation by running away with a married woman but it was she that was forever tainted. Refused a divorce by her husband she had to wait until his death to marry again. Infidelity in women was never forgiven, whereas it was expected in men. Lady Denny, Venetia’s friend, is more than aware that her husband has had affairs and sees it as her lot as a wife to accept that. Were it the other way around that she would have been shunned from society.

Heyer gently pokes fun at the staid world of the Regency era and shows how the role of women would eventually be able to change. Venetia has in her the seeds of female empowerment and she sows them carefully and surreptitiously, the only way she can.

I was asked to describe her work whilst I was part way through Venetia. The best I could come up with was Jane Austen fan fiction with an edge. The writing has all there is to love about Austen, the world at the time and also a lightness, a playfulness that seems to hint that Heyer was also very much making her own mark and not merely trying to emulate another author. (There are also very Austen like references. Denny being one of the militia in Pride and Prejudice, Undershaw being very similar, to me at any rate, to Uppercross (Persuasion) another).

The feeling I had from picking up the book to turning the last page was how much fun it was and how much fun I was having reading it. Heyer no doubt had fun writing it and I can see why legions of loyal readers want to spend hours in her world.

I loved my first foray into the world of Georgette Heyer.  It was a pleasure to curl up with Venetia and get lost in her story. Yes, I know I should have listened to the people telling me to read her sooner. The good thing is, I have the rest of her books still to discover. I’ve feeling I’m going to enjoy my Heyer journey.

Author of over fifty books, Georgette Heyer is the best-known and best-loved of all historical novelists, who made the Regency period her own. Her first novel, The Black Moth, published in 1921, was written at the age of seventeen to amuse her convalescent brother; her last was My Lord John. Although most famous for her historical novels, she also wrote eleven detective stories. Georgette Heyer died in 1974 at the age of seventy-one.