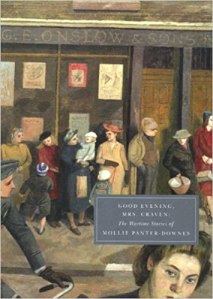 Mollie Panter-Downes was noted for her wit, perception and incisiveness thanks to her reflections on English domestic life during the war years. This collection of her short stories explores the common themes of the day, discussing fear, separation, evacuations and the wartime obsession with food.

In Good Evening Mrs Craven, the war time stories of Mollie Panter-Downes, written from the beginning of the war to 1944, are collected together in one volume.

This is a lovely set of stories that whilst each entertain in their own right, together give the impression of a complete and cohesive look at the progression of the war from those left behind.

Each story is a little vignette into the lives of those left behind during the war. There is the Admiral, too old to be enlisted in this war, living under the impression he brings a little dazzle and light to a woman he flirts with, all the while not realising that she puts up with the flirting because she thinks it helps him. The Mrs Craven of the title is left behind in more ways than one and gives a glimpse into another facet of life.

There are sewing circles and committees to sit in with, where the reader sees the politics and strife that came with the clashes of personalities of people who would not doubt have had little to do with each other if the war had not happened.

There are tales of evacuees, not so much how they themselves reacted to being moved across the country but the hidden views of those who took them in.

Of course class divides are discussed. In one story an elderly woman tries to show her faithful old maid that the time for social etiquette such as dressing for dinner or eating alone in a draughty dining room are redundant during war time and tries to imply that it is unlikely those times will return. Friendships are tested when bombed out pals come to stay, each one finding the other’s endearing quirks are annoying habits when living in each other’s pockets.

The great thing about short stories is that you can dip in and out of them when you have a few spare minutes. It’s easy to return to without trying to remember where you were at with a story. There’s a wonderful layering to the stories in this book. Each one adds it’s own colourful element to give the reader an idea of what life may have been like at the time and the unseen struggles people had to endure (or cause as the case may be).

This is a fascinating collection which gives the reader an insight into the lives of those left behind. It is no doubt one I shall return to in the future.