John Gwynne is the author of The Faithful and the Fallen series, which included the novel Malice and the Of Blood and Bone series which included A Time of Dread.  His latest novel, The Shadow of the Gods is published on 6 May 2021.

John kindly answered a few of my questions.

1. Tell us a little about The Shadow of the Gods.

Hi Janet, thank you so much for the invite, it’s lovely to be here.

The Shadow of the Gods is my love-song to Norse mythology and Viking era-history.

It is set in a cold, hard world, framed by ice-blue fjords and shadow-dark forests, where longships sail the seas and creatures of tooth and claw prowl the land, and at its heart, I hope, it is a tale of family and friendship, of love and loss, of betrayal and revenge.

The gods have fought themselves to extinction, and in their fall, they broke the world. Now, hundreds of years later, humanity is rising from the ashes and forging a new world, ruled by petty jarls and would-be kings and queens. The bones of the dead gods lay scattered across the land, and the bloodlines of those dead gods live on in their offspring. But these survivors carrying the blood of the old gods are now hunted by bands of mercenary warriors because they are valued for the powers their god-blood gives them. If caught they are enslaved and used in the quest for power.

But now an old power is stirring, and children are disappearing.

The first inspiration for The Shadow of the Gods, and the Bloodsworn Saga as a whole (the title of the series), was Beowulf, that fearless monster-hunter and his band of mercenary warriors, and Ragnarök, the end-of-days battle where the gods fought and died.

Since then, I have spent a lot of time immersing myself in Norse mythology, Scandinavian folklore and Viking-era history. Also, I’m a Viking reenactor along with my three sons, and we enjoy standing shoulder to shoulder in the shield wall. All of these things have inspired me to write this series, and my hope is that all of this passion, research and experience will help me to craft a world that seeps Norseness and an underlying, rune-filled dread.

I’m somewhere in the middle. I start with some general brainstorming until I’ve come up with a rough list of events and have a good idea of the main characters, and then I start writing, not quite sure how each individual character is going to find their way to the planned events. I work that out on the way.

Ha, publishing still feels like a strange beast to me, and I am constantly surprised by the way things work.

The biggest surprise to me was how much a team effort getting a book onto the shelves of a bookshop really is. Writing the first draft is not even the beginning, and once that’s done there is so much else that needs to happen. There are structural edits, line edits, copy edits, cover-art meetings, artists to brief, fonts to decide, marketing timetables. Sometimes to the average reader it can feel like publishing moves at a glacial pace, but behind the scenes it is anything but glacial. And the team involved are amazing – passionate people that love books. Agent, editors and a host of team members that keep the cogs turning.

5. You have already written The Faithful and the Fallen series and The Shadow of the Gods is the start of a new saga. What do you think are the benefits and burdens of writing a series?

The burden of writing a series? Keeping those multiple threads and characters all moving forward can be tricky, it’s like a constant juggling act, so I think pacing is harder in a series than a stand-alone, and keeping the story interesting for three, four books or more is obviously a bigger ask than keeping it interesting for a single book. Also, with each book into a series the pressure builds, to equal and/or exceed the previous book. So far, I’ve only ever written series, but I’d like to have a go at a stand-alone. I’d enjoy that challenge of telling a tighter story, and it would probably be on a smaller, more intimate scale than I’ve written before.

When not writing I’m spending time with my family. My daughter Harriett is profoundly disabled, and my wife Caroline and I are her carers, so much of our day is taken up with looking after Harriett. Two of my three sons still live at home, and fortunately for us all we all get on incredibly well (otherwise lockdown would have been far more difficult than it turned out for us).

To relax I just enjoy spending time with family, watching films together, talking books, eating ice-cream 🙂 and my wife has a horse, so spending time at the stable and out in the fresh air is always nice.

I am also a Viking re-enactor (along with my three sons) and really enjoy picking up my shield and sword/axe/spear and standing in the shield wall, but that hasn’t been an option for the last year or so because of coronavirus. Hopefully I’ll be back to training with my shield brothers and sisters soon.

Ha, this question is NOT FAIR. Also, it is impossible to answer, there are too many books that have had such a deep impact on me.

Just to narrow it down would be nigh on impossible, but I’ll give it a go.

The Lord of the Rings by JRR Tolkien would have to be in there. It’s the fantasy series that I’ve read countless times over the years, and I love it with my whole heart.

Bernard Cornwell’s trilogy on King Arthur, the Warlord Chronicles, is also right up there amongst my all-time favourites. It’s another series that I have re-read many times, and every single time I weep. Love, love, love this series.

So, that’s six books already. I think I should stop now.

Haha, I like that. Okay, the question I’ve never been asked that I wish I had been asked is:

‘How many swords do you own?’

The answer is: eight. 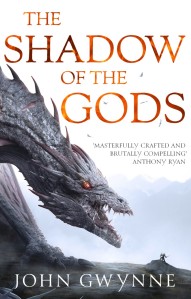 THE GREATEST SAGAS ARE WRITTEN IN BLOOD.

A century has passed since the gods fought and drove themselves to extinction. Now only their bones remain, promising great power to those brave enough to seek them out.

As whispers of war echo across the land of Vigrið, fate follows in the footsteps of three warriors: a huntress on a dangerous quest, a noblewoman pursuing battle fame, and a thrall seeking vengeance among the mercenaries known as the Bloodsworn.

All three will shape the fate of the world as it once more falls under the shadow of the gods. 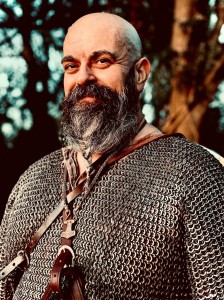 John Gwynne studied and lectured at Brighton University. He’s been in a rock ‘n’ roll band, playing the double bass, travelled the USA and lived in Canada for a time. He is married with four children and lives in Eastbourne running a small family business rejuvenating vintage furniture. He is the author of the epic fantasy series The Faithful and the Fallen including Malice, Valour, Ruin and Wrath.