Caroline Lea is the author of The Glass Woman. Her latest novel, The Metal Heart, is published by Michael Joseph on 29 April 2021.

Caroline kindly answered a few of my questions.

1. Tell us a little about The Metal Heart.

The Metal Heart is set in the remote wilds of the Orkney islands during 1940, when five hundred Italian prisoners of war arrive to fortify the islands. The Orcadians are suspicious and fearful of the outsiders but orphaned sisters Dorothy and Constance, who are outcasts themselves, offer to nurse any prisoners who fall sick. Dorothy befriends Cesare, an artist swept up by the war, and is captivated by his plan to build a chapel from war scrap and debris, but Constance is sceptical of their relationship and distrustful of Cesare. As the beauty of the chapel grows, so do tensions between the islanders and the outsiders and it becomes clear that everyone will have to make a choice that will change their lives forever.

I always find true stories an inspirational place to start with historical fiction and it was the chapel itself that first appealed to me. I had an idea for a wartime love story, with all its inherent turmoil, conflicts and divided loyalties, and I wanted to place that against the close relationship of two sisters, and the way that both love and war might affect them. But it was when I found out about the Italian Chapel in Orkney that the story really came to life. I was captivated by the idea that these men, so far from everything and everyone they knew, had worked together to build something so beautiful and so hopeful, in such a time of conflict and division, and using the scrap and debris of war. It feels like such a powerful metaphor for optimism and hope in times of darkness – a concept that feels very apt at the moment.

I research a lot before I start writing an actual draft, and I make around 100 pages of notes, without feeling any pressure to solidify a story, initially. Some of those jottings are broad brush strokes, outlining ideas about plot, but often they’re ideas about the characters’ past or thoughts about the setting. When I start the first draft, I often have a good idea of where I’m going, but nothing is set in stone. I’ve tried planning in infinitesimal detail and I felt like I was then forcing my characters to fit my plot, rather than letting the plot emerge from the characters’ changing motivations. The latter, for me, leads to a much more convincing novel and more nuanced characterisation. It’s also lovely to feel surprised, at times, by my characters’ actions.

4. Is there still anything about the publishing process that surprises you?

I’m continually surprised and humbled by the time, energy and commitment that other people invest in my books. I’m very lucky to have an amazing agent and a brilliant editor (both here and in the US), as well as wonderful teams for publicity, sales and marketing, all dedicated to lovingly pressing my book into reader’s hands. And that’s before we start on book bloggers and booksellers and readers who have been so kind and enthusiastic, and writers who are kind enough to read my books and say lovely things about them. Before publication, I couldn’t have envisaged how much other people would care and what a positive, supportive environment the writing world would be. Writing feels like a solitary career, often for people who are vaguely masochistic and very self-critical, so the external support is a real gift.

I’m not very good at switching off from whatever I’m writing at any given moment – even while cooking or on the school run, I think about characters and ideas. But I’ll often have days when I don’t have the time (or energy or motivation) to write and I’ve learned to be kind(ish) to myself in those times. Before the pandemic, I liked to travel. I read a lot and watch a lot of box sets. I used to run, but then I injured myself and now running hurts, so I walk my dog instead. I spend time with my partner and my kids. I’m lucky enough to have some brilliant friends who help to keep me sane – or close enough to fool people, and I enjoy drinking good wine and eating good food with them.

Oh! That’s almost impossible to answer. I’m torn between so many, but could probably narrow it down to two: The God of Small Things, by Arundhati Roy, and The Bloody Chamber, by Angela Carter. Both books are so linguistically rich that they’re a bit like chocolate cake for the brain, and I could happily reread sections multiple times, just to enjoy the language. More than that, though, both books are peopled with brilliant, compelling characters and are about ideas that go beyond the story itself: relationships and politics and conflict and prejudice and female empowerment. They bear multiple rereads.

No one has ever asked me about my ‘failure’ rate (the books I haven’t had published, or the words I’ve deleted) and I feel like it might be an encouraging thing for aspiring writers to know: before my first novel was published, I’d written and discarded two and a half entire novels and countless other ideas.

Before starting The Glass Woman, I submitted to my agent 250 pages of a novel which she vetoed (with good cause: it was terrible!). After finishing The Metal Heart, I wrote an 85,000 novel that will never see the light of day – my agent vetoed it before reading it and I’m so glad she did. It’s abysmal! I’ve called these ‘failures’ but that’s not really how I think of them. I’ve learned so much from each of them. Throughout the editing process, I probably write at least double the length of the final novel, but I think that’s a good thing. Finding the best way to tell the story isn’t easy but you should never be afraid of writing ‘badly’: even bad writing teaches you something. And they’re only words. You can always write more. 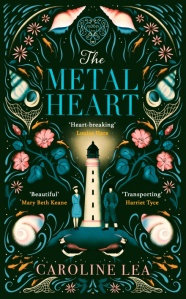 Resentful islanders are fearful of the enemy in their midst, but not orphaned twin sisters Dorothy and Constance. Already outcasts, they volunteer to nurse all prisoners who are injured or fall sick.

Soon Dorothy befriends Cesare, an artist swept up by the machine of war and almost broken by the horrors he has witnessed. She is entranced by his plan to build an Italian chapel from war scrap and sea debris, and something beautiful begins to blossom.

But Con, scarred from a betrayal in her past, is afraid for her sister; she knows that people are not always what they seem.

Soon, trust frays between the islanders and outsiders, and between the sisters – their hearts torn by rival claims of duty and desire.

Caroline Lea grew up on the island of Jersey and gained a First from Warwick University. Her fiction and poetry have been shortlisted for the Bridport Prize. Her debut novel, The Glass Woman, a gothic thriller set during the Icelandic witch trials, was shortlisted for the HWA Debut Crown Award. Her next novel, The Metal Heart, was a powerful Second World War love story set on the island of Orkney.