Lorraine kindly answered a few of my questions.

1. Tell us a little about Uncoupling.

Uncoupling is my debut novel and was published by Orion on the 18th February in the UK and will be out with Penguin Random House in the US on the 24th August as The Paris Connection. It’s a modern love story about a couple who get separated on a night train and end up in different European cities. Set mainly in Paris, it’s essentially about how sometimes we need to go in the wrong direction to find everything we’ve been looking for.

There were a couple of things! Firstly, my brother and his girlfriend went interrailing around Eastern Europe several years ago and when one of them moved carriages to get some sleep, the train split and they became separated, ending up in different destinations. Everything was fine and they found each other again, but I’d always thought it would make an excellent beginning to a book! I also adore the film Before Sunrise, which was written and directed by Richard Linklater. It’s a relatively simple love story about two people who meet on a train, have a connection and take a chance on each other by spending the day together. I liked the idea of exploring what could happen if somebody were to take a risk and try something way out of their comfort zone – in my main protagonist Hannah’s case, it enabled her to look at her life from a whole new perspective.

I’m a planner. And actually, that’s one of the most fun parts of the process for me – with Uncoupling I used coloured post-it notes to sketch out scenes and plotted the novel using the book Save The Cat. It’s aimed at screenwriters, but I found it really useful in terms of determining the shape of the story and the character arcs. My three main characters changed a lot while I was re-drafting, really only coming together properly when I got my publishing deal and began working with my brilliant UK and US editors. For my second book, which will be out in April 2022, I used the writing software Scrivener, although I’m pretty sure I’m only using its most basic features – I found it a bit baffling at first! I gave myself a couple of months to really think about the story, to re-read some of my books on plotting and to do preliminary character work, so that when I came to write the first draft, I had everything in place and was able to get it down relatively quickly, which worked well for me since first drafts are my LEAST favourite part of the process (I hate that blank page)! Within each scene, even though I know what needs to happen and what the point of the scene is, I still felt very free to just write away within that and to see where it takes me.

I suppose I hadn’t really thought about branding before I got my deal – i.e. the way the book would be marketed and how the package would be put together in terms of the cover, the blurb on the back, the slotting into a particular genre and so on. I also had no idea how much time I’d have to spend on social media – I felt very shy about posting things about myself at first, imagining that nobody would be interested or that they would get fed up with me talking about my book. I actually quite enjoy it, now, especially Instagram, where it’s more about creating a nice image than it is about making witty or interesting comments!

Under usual circumstances, I love travelling and going on city breaks, in particular. I spend hours and hours planning them, finding the best hotels, coming up with itineraries and working out where to have dinner. I also love long baths (even better if it’s in a hotel room!), going to the cinema, and meeting friends in coffee shops (often I’ll write there, too). I also watch a LOT of TV – I got very in to French comedy dramas like Call My Agent! and The Hook Up Plan while I was working on Uncoupling, as it helped me get into the Parisian mood!

I think it would have to be Normal People. In my opinion, Sally Rooney crafted those characters and that relationship to perfection and I re-read it recently, while I was working on my second book, hoping that some of her ability to write brilliant, simple, realistic dialogue might rub off on me!

Since I love city breaks so much, I’d love to have been asked about my favourite cities in the world. I’d have to say Paris, I think, which I’ve been to several times, most recently for a research trip just before the pandemic. For me it’s got everything you could ask for, from beautiful architecture to cool shops and delicious food and wine. I live in London, so that’s one of my favourite places, too. And I spent two months in LA when I was trying to be an actress a few years ago – I rented a bungalow in West Hollywood with a group of British and Dutch actors and we’d be at these quite intense acting classes during the day and then out in the evenings (needless to say my credit card was NOT looking healthy when I got back)! And then at weekends we’d do walks in the mountains or go to the beach – it was the loveliest time.

Hannah and Si are in love and on the same track – that is, until their train divides on the way to a wedding. The next morning, Hannah wakes up in Paris and realises that her boyfriend (and her ticket) are 300 miles away in Amsterdam!

But then Hannah meets Léo on the station platform, and he’s everything Si isn’t. Spending the day with him in Paris forces Hannah to question how well she really knows herself – and whether, sometimes, you need to go in the wrong direction to find everything you’ve been looking for… 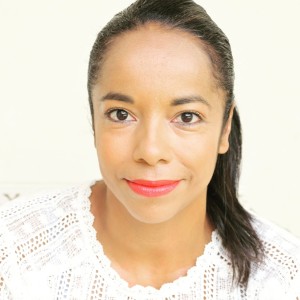 Lorraine Brown previously trained as an actress and is about to complete her final year of a postgraduate diploma in psychodynamic counselling. She lives in London with her partner and their 6-year-old son. Uncoupling is her first novel.