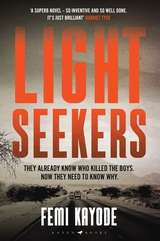 When three young students are brutally murdered in a Nigerian university town, their killings – and their killers – are caught on social media. The world knows who murdered them; what no one knows is why.

As the legal trial begins, investigative psychologist Philip Taiwo is contacted by the father of one of the boys, desperate for some answers to his son’s murder. But Philip is an expert in crowd behaviour and violence, not a detective, and after travelling to the sleepy university town that bore witness to the killings, he soon feels dramatically out of his depth.

Will he finally be able to uncover the truth of what happened to the Okiri Three?

Their deaths are plastered over social media. Three university students dragged through the streets of a town in southern Nigeria. Their murders caught on video, their murderers plain to see. The thing the world doesn’t know is why the men were murdered. Investigative psychologist Philip Taiwo is drafted in to find out why. Used to working from a desk than at a crime scene, can Philip uncover the secrets and find out the truth?

Lightseekers introduces the reader to a protagonist who looks at a crime from a different angle. Philip Taiwo is an investigative psychologist, more used to aiding police from the comfort of his study. His return to Nigeria from the US soon finds him thrust into a horrifying case in which three university students beaten and burned to death. Philip has to find out what made a crowd, a town’s population, turn on these three men in such a violent and brutal way.

Aided by Chika, an employee of the father of one of the victims, Philip finds himself facing a wall of silence from the town folk. The police aren’t keen on helping, secrets are being well and truly hidden and they face hostility at every turn. Soon the pair find themselves facing violence, this time directed at them and Philip has to decide who he can trust.

What drives the book is the unanswered question of what drove a town to stand by and allow three men to be killed in front of them.  Why did they stand by and do nothing, or in some cases take part, in the deaths of people who seemingly had no link to the town? This is the main focus of Philip’s investigation. The murderers were seen on video. The authorities think they know the who. It is just the why that eludes them.

One of the things I loved about the book was the setting. I confess to knowing little about Nigeria and Lightseekers was a brilliant, brief, armchair trip to this vibrant country with mention of it’s troubled past and colonialism but also glimpses of its vibrancy, noise and colour.

The murdered men were all students at a nearby university. The issue of university cults is soon raised. I have to admit this was a new phenomenon to me. From reading the book it appears that these aren’t the religious groups the term cult usually connotates but more insalubrious and dark versions of fraternities, which facilitate criminal actions and encourage violence and secrecy.

The story pulls the reader along, allowing them a glimpse of the truth that is just out of reach of Philip and Chika. There’s a sense of danger but also of sadness at the harm that humans can engineer towards each other.

Despite their ups and downs Philip and Chika make a good pairing. The trust between the two is fragile but eventually earned. I hope the pair feature together  in future novels.

An interesting start to a new series. I look forward to see what is in store for Philip in future stories.