The first suggestion today comes from Philippa East. Her debut, Little White Lies, was published by HQ on 6 February 2020 and her latest novel, Safe and Sound is published on 18 February 2021.

She picked Ice by Anna Kavan, republished by Penguin on 2 November 2017.

No one knows why the ice has come, and no one can stop it. Every day it creeps further across the earth, covering the land in snow and freezing everything in its path. Through this bleached, devastated world, one man pursues the sylph-like, silver-haired girl he loves, as she keeps running – away from her husband; away from the sinister ‘warden’ who seeks to control her; away from him.

Here’s what she had to say.

“There’s a book that had an absolutely profound effect on me that I have never experienced with any other novel. I have no idea whether it would have the same impact on other readers, but it is a novella called ‘Ice’, written by Anna Kavan in 1964. It’s a genre-defying, apocalyptic and highly-surrealist story, in which a man known as ‘the warden’ searches for an elusive woman in a country that is governed by a secret organisation while great walls of ice overrun the world.

My understanding is that the author Kavan struggled with mental illness and drug addiction, and book certainly feels hallucinatory and feverish. When I reached the end, I couldn’t stand up for about twenty minutes, because of the force of the blow the story had dealt me – and yet I have never heard anyone else mention this book!”

He chose King of the Crows by Russell Day, published by Fahrenheit Press on 30 April 2020. 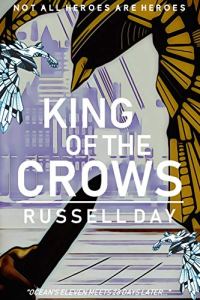 2028, eight years after a pandemic swept across Europe, the virus has been defeated and normal life has resumed.

Memories of The Lockdown have already become clouded by myth, rumour and conspiracy. Books have been written, movies have been released and the names Robertson, Miller & Maccallan have slipped into legend. Together they hauled The Crows, a ragged group of virus survivors, across the ruins of London. Kept them alive, kept them safe, kept them moving.

But not all myths are true and not all heroes are heroes.

Questions are starting to be asked about what really happened during those days when society crumbled and the capital city became a killing ground.

Finally the truth will be revealed.

Here’s what he had to say.

“I absolutely loved King of the Crows by Russell Day. It was published by the indie publishers Fahrenheit Press right at the start of lockdown. The timing was coincidental but it’s about the

survivors of a pandemic who are suspected of robbing a bank whilst the world was closed down. It’s comfortably the most inventive, imaginative book I’ve read in years with the story told from several viewpoints and different media including screenplays, social media postings, urban graffiti autobiographies, you name it, it’s in there. But at its simplest it’s a zombie heist story so what’s not to like?”

So there we have it, two more books that are gently being shouted about. I haven’t read either but from the descriptions it sounds like I should. Have you read either title? Do you have a quiet novel you want to shout about? Do let me know.