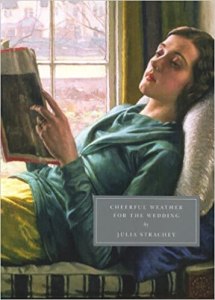 A short novel that was first published in 1932 by a niece of Lytton Strachey: in this ‘sharp, unsentimental domestic comedy, the weather is something less than cheerful the day Dolly Thatcham marries the Hon Owen Bingham: “In the furious March gale, everyone felt as though they were being beaten on the back of the head and on the nose with heavy carpets, and having cold steel knives thrust up inside their nostrils.”‘

It is supposed to be Dolly Thatcham’s happiest day. She is to marry Owen Bingham. Her mother is fluttering around the house, her sister is not happy with her appearance, the page boys are fighting and an old friend of the bride is trying to process just exactly what he feels about the impending nuptuals.  So why is the bride hiding in her room with a bottle of rum?

This is a short novella, though it is not short of story. Each of the characters are easy to imagine, as are the sitting room, library and bedroom of the bride. Mrs Thatcham is easily conjured, flitting about, fretting and preening in equal measures. She sees the wedding as a great match for Dolly, who is to be shipped off to South America soon after. She is, perhaps, a rather insipid woman, the majority of her speech and correspondence devoted to the vista where the house sits or the geography of the area. And the weather of course. She is forgetful, giving conflicting instructions to the servants then exasperated when things go wrong. There is a mishap when she puts two guests in the same room so that the former nurse and the Canon end up in each other’s robes.

Dolly’s sister Kitty is blessed with ugly hands or so we are told. She is not suited to the bright yellow bridesmaid dress. These seem almost a device to compare the sisters, the beauty of the bride not to be overshadowed by her sister. The reader though is led to understand Kitty has an army of suitors and we witness her charm offensive in action when she talks to Joseph, Dolly’s friend.

Joseph doesn’t think he is in love with Dolly but he’s not sure. Dolly is perhaps more sure of her feelings but her wedding day is perhaps not the day to review them.

As for Dolly, the reader is allowed to enter her room and some of her thoughts. She is resigned to marrying Owen, she doesn’t dislike but has realised in seeing Joseph, just how different her feelings are for the two men. She is determined to make the best of her future, she just needs to come to terms with it first.

There are a whole host of characters who walk in and out of the house, described briefly or in more detail. The most obvious exception is Owen, the groom. It says more for his absence, from the thoughts of his bride and his future mother-in-law of how he is deemed. For the former he is the inevitable future, for the latter, a chance to shine in the reflected glory of the match. It is perhaps this lack of focus on him that makes Owen the character the reader feels for the most, for his emotions are almost discarded.

There isn’t much that happens in this slim volume. The reader is an uninvited guest, peeking in at the preparations and bustle and privy to the inner workings of the wedding party. It is about the disparate group of characters that always gather together at weddings, maiden aunts, dowager aunts, schoolboys and men of the cloth, all joining to celebrate a happy occasion. They may not speak for months or years, only occasionally write or be forgotten about until the next occasion but on a wedding day people get dressed in their Sunday best and play a part. It is also about convention, the convention of the time. Love was not a requirement for a relationship, just a happy bonus. Appearance was everything and sacrifices had to be made between happiness and duty.

Julia Strachey (1901-79) was born in India and lived with relations in England after her parents divorced. She worked as a model at Poiret, as a photographer, and as a publisher’s reader. She was married to the sculptor Stephen Tomlin from 1927-34. In 1939 Julia met the art critic Lawrence Gowing, who was twenty-one; the two married after fifteen years. Frances Partridge (1900-2004) was the oldest surviving member of the Bloomsbury Group, having been married to one of its members and counting most of them as her friends. Julia Strachey was one of her oldest friends and she wrote “Julia” a biography. Partridge kept a diary all her life and several volumes have been published by Little Brown.