S.J. Bennett is the author of The Windsor Knot, published by Zaffre on 29 October 2020. She has also written YA books as Sophia Bennett, including Love Song, Threads, Following Ophelia and You Don’t Know Me.

She kindly answered a few of my questions.

1. Tell us a little about The Windsor Knot.

It’s the first in a mystery series with a very special detective. The Queen solves crimes. In this book, set in 2016 during the time of her 90th birthday celebrations, there is a murder at Windsor Castle. The Queen’s new assistant private secretary, Rozie Oshodi, finds herself being sent on increasingly odd secret missions by ‘the Boss’, and gradually discovers that the Queen has been solving crimes for decades. She’s quite brilliant at it, behind the scenes of her normal royal life, combining a great memory, a fine eye for detail, expertise in many fields gathered over the years, and a shrewd appreciation of character. She always lets someone else take the credit – which is why the general public don’t know. In this case, a story of Russian spies isn’t all it first appears to be.

I was driving up to a writing retreat, where I planned to write several chapters of another detective story I was working on (or at least trying to). I happened to be thinking about an episode in The Crown where the Queen picks up a model soldier from a battlefield and puts him back in the wrong place. I found myself thinking, ‘She’d never do that’. She would have recognised the battle. She’d also know it’s rude to move other people’s model soldiers about! I know this because my father, who met her several times during his career in the army, has always been impressed by her knowledge of military history.

I’ve been interested in the Queen since 1977, when I was first given a book about her clothes. I was fascinated by how much thought goes into her wardrobe and the constant tension between the luxury she has access to, and the need to dress appropriately. She mustn’t be too fashionable, or unfashionable, she must stand out but not show off. It’s complicated being her.

On my drive to the retreat, I also got to thinking about what an expert she is in many fields, how underestimated she often is (as ‘a little old lady in a hat’), how interesting it must be to be looking out, when everyone else is looking at you, and how much you must spot that other people don’t see. As soon as I had that idea, I thought, ‘Detective!’ She’d be brilliant. Then I realised I could write a series covering her fictional mystery-solving around Windsor, Balmoral, Buckingham Palace, the Royal Yacht Britannia … It could go on and on. And backwards and forwards in history too. Meanwhile I could explore that tension between what she has access to and what she can do about it without causing a stir. I quickly abandoned the other detective idea, as I could only focus on this one. But I knew that I had to do it right, or not do it at all. It took months and months to get the voice right. Once I’d done that, it raced along. I didn’t actually intend to make anyone giggle but myself, but I’m pleased that its inherent comedy seems to appeal to lots of readers too.

It was ten years before my first book was published. During that time, I would regularly get a great idea, get really excited about it, and rush at it until I was about 5000 words through – at which point I would find some hidden flaw in the concept that meant it just wouldn’t work. This happened over and over. So now I plan, more than anything to ensure the idea makes sense from start to finish, and also to give me scaffolding and confidence to get through the tricky bits when I suddenly wonder how I’m ever going to get through it. That still happens, but I can power on through more easily now.

My outlines vary from pages of bullet points to intricate spreadsheets. I never follow them exactly, but they always help me keep the pacing going and I rarely change what happens in the end. All the same, the best moments are what my fellow author Sheena Wilkinson referred to recently as ‘careless rapture’, when the words suddenly take off and go in a direction I wasn’t quite expecting. If I can make myself laugh or cry, or look up in a jolt of surprise, I know it’s been a good day.

4. Having been through the publishing process quite a few times, is there anything about the process of creating a book that still surprises you?

I’m always surprised by how hard it is after those first few thousand words, even now. Putting one word after another, ploddingly, to get from the opening chapters to the end, always feels ridiculously difficult when the initial idea seemed so smoothly straightforward. I’m usually surprised at how much the later edits hurt, after I’ve revised the book a hundred times to make it as close to perfect as I can. Although, oddly, in the case of The Windsor Knot, I was even more surprised that I didn’t get that many edits. Even the copy edits and proofs were OK – and I was doing them simultaneously on the UK and US editions, which were slightly different.

I’ve usually worked with small publishing houses, but now, with imprints within Bonnier in the UK and HarperCollins in the US, I feel as though I’m benefiting from Rolls Royces of publishing processes. It all happened exactly as the first lockdown came in and everyone was scrabbling around to work differently, facing huge obstacles to everything they normally did. And yet, by the time it reached me, the process seemed pretty seamless and everything happened on time. I was so impressed.

Well, we live in London and normally I love to go to art galleries and the theatre with my children.However, for now, we’re lucky to have a small garden that has brought me joy for years, even though none of it gets proper sunlight and getting flowers to bloom is a constant challenge. Today I was planting tulips and daffodils in pots, while listening to the audiobook of Tracy Chevalier’s A Single Thread, set at Winchester Cathedral. The autumn sun was shining and it was perfect.

I normally teach writing too – although with the new series coming out I’ve had to set it aside temporarily – and I run a podcast with my brother called Prepublished. It’s designed to give unpublished writers an insight into how writers and editors think, and how the publishing industry works, a bit like this lovely blog! I talk to debut authors and bestsellers, editors and agents about aspects of the craft. I’m just working on season two now, and I love doing it. I think some of the conversations I had from season one made writing The Windsor Knot easier. I was more certain about what I wanted to achieve, and how.

Ooh, interesting one. I haven’t been asked that before. It would have to be poetry, I think. The collected works of Seamus Heaney would probably do it. They would contain some consolation for the fact that I was down to only one book!

As a former YA writer I’ve done many dozens of school visits, so there is almost no question I haven’t been asked – except for your last one! Something I occasionally get asked by students and quite like (sorry, I’m slightly avoiding your question here) is which of my characters I’d most like to be. It’s a tough one, as all my books contain a certain element of wish fulfilment for me. But at the moment, I’d most like to be Rozie Oshodi, the Queen’s assistant private secretary and sidekick in the Her Majesty the Queen Investigates series. I interviewed for Rozie’s job in the 1990s and was very sad not to get it. It must be fascinating to be so close to the Queen and to see everything that goes on behind the scenes. Plus, Rozie is a decorated ex-army officer who’s good in a fight, brilliant at maths, several inches taller than me and very adept at walking in high heels. Lots of wish fulfilment going on there! 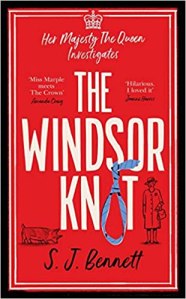 The morning after a dinner party at Windsor Castle, eighty-nine-year-old Queen Elizabeth is shocked to discover that one of her guests has been found murdered in his room, with a rope around his neck.

When the police begin to suspect her loyal servants, Her Majesty knows they are looking in the wrong place.

For the Queen has been living an extraordinary double life ever since her coronation. Away from the public eye, she has a brilliant knack for solving crimes.

With her household’s happiness on the line, her secret must not get out. Can the Queen and her trusted secretary Rozie catch the killer, without getting caught themselves?

SJ Bennett wrote several award-winning books for teenagers before turning to adult crime stories. She lives in London and has been a royal watcher for years, but is keen to stress that these are works of fiction: the Queen, to the best of her knowledge, does not secretly solve crimes.

You can read my review of The Windsor Knot here.