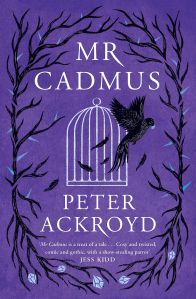 Two apparently harmless women reside in cottages one building apart in the idyllic English village of Little Camborne. Miss Finch and Miss Swallow, cousins, have put their pasts behind them and settled into conventional country life. But when a mysterious foreigner, Theodore Cadmus – from Caldera, a Mediterranean island nobody has heard of – moves into the middle cottage, the safe monotony of their lives is shattered.

The fates of the two cousins and Mr Cadmus, and those of Little Camborne and Caldera, become inextricably enmeshed. Long-hidden secrets and long-held grudges threaten to surface, drawing all into a vortex of subterfuge, theft, violence, mayhem … and murder.

Cousins, Miss Finch and Miss Swallow, live in cottages in a small rural village. The house between them lies empty until the mysterious Mr Cadmus arrives, hailing from the unheard of island of Caldera. His arrival marks a decided change in the women, and the village, as old secrets and murderous intent erupts to the surface.

A caldera is a volcanic feature that forms when a volcano collapses into itself, leaving a crater in its stead. That the island of Mr Cadmus’ birth is called Caldera is not without intent. His arrival results in a chain of events that leaves the lives of the cousins collapsed in on them, the resulting crater leaving collateral damage amongst the residents of Little Camborne.

From the sounds of the description, the reader picks up the book thinking they may be in for a jolly, village set cosy crime story. Or at least this reader did. And initially that is what it seems. But things take a dark turn very quickly and that darkness and slightly surreal air remains throughout this novella. The Misses Swallow and Finch are not the middle aged women you take them to be. They have depths hidden to all but each other. Mr Cadmus, when he arrives in his splendid yellow car, awakens the sleepy village and the sleepier residents.

There are some scenes that make the reader flinch, though they set the tone for later in the story, leaving the sense that things aren’t what they seem. This is very much a story about secrets and the past catching up eventually.

This is a short book at just over 190 pages but the reader is not short-changed with the story. Whilst it does speed ahead in some respects, at a pace that sometimes isn’t quite met by the reader, there is a complete tale and the reader doesn’t feel short-changed.

A strange little tale that leaves a residual pleasantly unpleasant sense of unease over the reader.

Peter Ackroyd is an award-winning author of novels including Hawksmoor, Chatterton and The Last Testament of Oscar Wilde, biographies of Ezra Pound, Blake and Dickens among others, and acclaimed non-fiction bestsellers London: The Biography and Thames: Sacred River. He has won the Whitbread Biography Award, the Royal Society of Literature’s William Heinemann Award, the James Tait Black Memorial Prize, the Guardian Fiction Prize, the Somerset Maugham Award and the South Bank Prize for Literature. He holds a CBE for services to literature.