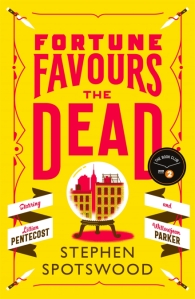 New York, 1946. Lillian Pentecost is the most successful private detective in the city, but her health is failing. She hires an assistant to help with the investigative legwork. Willowjean Parker is a circus runaway. Quick-witted and street-smart, she’s a jack-of-all-trades with a unique skill-set. She can pick locks blindfolded, wrestle men twice her size, and throw knives with deadly precision – all of which come in handy working for Ms P.

When wealthy young widow Abigail Collins is murdered and the police are making no progress, Pentecost and Parker are hired by the family to track down the culprit. On Halloween night, there was a costume party at the Collins’ mansion, where a fortune teller performed a séance which greatly disturbed Abigail. Several hours later her body was discovered bludgeoned to death in her late husband’s office. Problem is, the door to the office was locked from the inside. There was no-one else in the room, and the murder weapon was beside the victim; the fortune teller’s crystal ball.

It looks like an impossible crime, but Pentecost and Parker know there is no such thing…

Wealthy widow Abigail Collins has been found dead in the study of her New York mansion. Though a fire raged in the room, Abigail was found bludgeoned in the chair where, in previous year, her husband had killed himself. The police are stumped as the room was locked from the inside and there was no one in the room when the body was discovered. Soon the family call in the expertise of Lillian Pentecost and Willowjean Parker, who soon find out things aren’t quite as they seem.

Fortune Favours the Dead walks the line between Golden Age Crime and the more modern novel. Luckily it pulls it off with aplomb. There are all the elements of a classic murder mystery; the locked room, the glamourous rich family, the limited but all as potentially guilty suspects. There’s even a butler. There’s also a more modern take in that relationships are developed and discussed that never would have been in books from the 40s and the detective duo are two single women, working in what would have been a man’s world at the time.

Willowjean Parker first meets Lillian Pentecost on building site in down town New York. From there we move forward in time to see Will, a former circus act, now working as an assistant for private detective Lillian, living and working from her Brownstone in Brooklyn.

Pentecost and Parker are perhaps an homage to Holmes and Watson. Pentecost has her particular ways but is not precious about letting Parker find things out her own way. Parker is not merely a sidekick, a historian chronicling Pentecost’s work, though the story is written with her narrating it through memoirs. Parker is as much an investigator in the story as Lillian is, and the two work together to discover the truth.

Pentecost and Parker are engaged by the Collins family to discover who killed Abigail Collins, found bludgeoned to death in the same chair where Al Collins, her husband, shot himself, the previous year. Their children, Randolph and Rebecca are keen to find out who killed their mother but both may be keeping secrets of their own. Throw in disgruntled employees and a psychic who happened to give a reading just before the murder and you have the makings of an intriguing and entertaining murder mystery.

I loved every minute of this book, from the opening page to the final sentence. The biggest takeaway from it is how much fun it was.  And sometimes fun is just what is needed. There’s no pretence about it. The story is engaging, comical in places, real and leaves the reader feeling they have made new friends. There are plenty of twists and turns but all fit with the story and don’t feel thrown in for the shock factor.

I thoroughly enjoyed this first in what looks to be a brilliant series, so much so that on finishing Fortune Favours the Dead I immediately wanted to read the next. Unfortunately that won’t happen for a while but I will be on the lookout for more Pentecost and Parker books in the future.