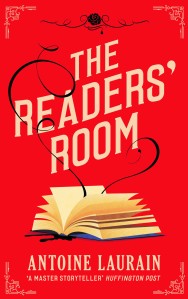 When the manuscript of a debut crime novel arrives at a Parisian publishing house, everyone in the readers’ room is convinced it’s something special. And the committee for France’s highest literary honour, the Prix Goncourt, agrees.

But when the shortlist is announced, there’s a problem for editor Violaine Lepage: she has no idea of the author’s identity. As the police begin to investigate a series of murders strangely reminiscent of those recounted in the book, Violaine is not the only one looking for answers. And, suffering memory blanks following an aeroplane accident, she’s beginning to wonder what role she might play in the story …

Violaine Lepage has published a sure fire hit. The manuscript, found in the reading room of the publishing company where she works, is agreed by all to be something special. When it is shortlisted for a book prize, Violaine runs into a problem. She has no idea who the author is. She has to find him before the prize is announced. And when murders begin to take place that replicate those in the book, Violaine is not the only one wanting to find the mystery author.

Violaine is devoted to her job as publisher. So much so that she faces her fear and loathing of flying to go and visit her old friend Stephen King. On the way back the plane crashes. Whilst Violaine retains her fear, she loses memories. Parts of her have disappeared and she is trying to recover them. At the same time she is trying to track down an elusive author who may not be all that he appears. When she is approached by the police who also want to speak to the author, Violaine begins to wondering if there is something in her past that may have led to her involvement in the murders, the book or both.  As Violaine tries to find out the identity of the author, she realises she has to go back into the past she had left behind.

This is very much an ode to books, as well as a tongue in cheek look at murder mysteries, perhaps the most popular genre. The reading room appears to be a magical place where miracles happen. It is the birth place of books, a storage unit for stories, filled with untold possibilities just waiting to be read and released.

As the story progresses the reader finds out more about Violaine and her route to where she is now. The story flits between Violaine and the police, investigating a series of bizarre murders. As the pages turn, the reader begins to see clues that connect the two worlds of fact and fiction.

Whilst there is the potential for the story to become dark, it just shies away from that invisible line. There is that underlying tension, the knowledge that some things just aren’t quite what they seem, but it is kept together by a quirkiness that keeps it slipping into something grittier.

This is more of a novella, at 169 pages. That is not to say it is too short. Perhaps the ending could have benefited with a little more padding out but the pace of the story, and it’s eventual conclusion aren’t rushed.

There is that magical element that comes with reading translated works. It’s the only thing that reminds me I’m reading something that was originally written in a different language. It’s always a skill when the reader thinks they are reading the author’s words and not those of the translator, and it is brilliantly done here.

A murder mystery with charm which is a delightful combination.

Antoine Laurain is a novelist, screenwriter, journalist, director and collector of antique keys. A truly born and bred Parisian, after studying film, he began his career directing short films and writing screenplays. His passion for art led him to take a job assisting an antiques dealer in Paris. The experience provided the inspiration for his first novel, The Portrait, winner of the Prix Drouot.

Published on the eve of the French presidential elections of 2012, Antoine’s fairytale-like novel The President’s Hat was acclaimed by critics, readers and booksellers, who awarded it the Prix Landerneau Découvertes. The English translation was a Waterstones Book Club and ABA Indies Introduce pick, and a Kindle Top 5 bestseller. This novel, full of Parisian charm, was the winner of the Prix Relay des Voyageurs, a prize which celebrates the enjoyment of reading. Since then, The President’s Hat has been adapted for television in France.

Antoine’s novels have been translated into over twenty languages, including Arabic and Korean. Sales of his books across all formats in English have surpassed 180,000 copies, and The Red Notebook (2015) has become one of Gallic Books’ bestsellers both in the UK and the USA.
Also published: French Rhapsody (2016), The Portrait (2017), Smoking Kills (2018) and Vintage 1954 (2019).