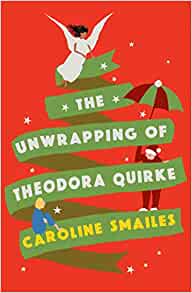 Theodora Quirke has no reason to be merry. It’s bad enough that she has to work on Christmas Eve but now there’s a drunk bloke dressed as Santa and claiming to be St Nick hanging around outside her flat. Given he’s professing to be the giver of Christmas miracles and nearly 2000 years old, she’s wary.

Things get even more weird when St Nick insists he’s there to save Theo. And with the next St Nicholas Day somehow fast approaching, he’s even got a plan that’ll change her life forever.

When Theodora Quirke finds a strange man lurking outside her block of flats on Christmas Eve she surprises herself by not running away screaming. The grubby, overweight man, in scruffy clothes and with food in his beard does not look like the St Nick he is claiming to be. Theo’s guard is down and for some reason she is drawn to St Nick, who tells her he is here to save her. Only Theo doesn’t think she needs saving.

It may be the season of good will to all men but Theodora Quirke is more likely to deck St Nick than deck the halls. At first she finds him infuriating, and quite disgusting. And yet, there is something she recognises in him. She sees through the disguise he’s been given and finds the kindness within.

St Nick has quietly been performing miracles for the last few hundred years. Over time he’s seen his deeds replaced by the commercialism of Santa Claus. He tasks the angels with finding people around the world worthy of a small personal miracle and believes that Theo is the one to be the first female angel. But that would mean becoming immortal. And whilst Theo believes that there isn’t much left for her in the world, she’s not sure she wants to leave it behind.

Theo has had a hard life, for someone still only 19. Passed from foster carer, to children’s homes, she finds refuge and love with Gabriel and his mother Francesca. But then Gabriel dies and Theo finds herself alone again. As St Nick takes her on a retrospective of her life she discovers things about her past she never knew and finds a kind of peace in the process.

There are many heart felt scenes in the book, the death of Gabriel being one of them, but there are many more life affirming, and very funny moments. Alongside Theo’s training to become an angel the story is interspersed with posts from the St Nick Facebook page, set up by Dottie Hope, a recipient of one of St Nick’s previous miracles. As the story progresses we see that St Nick’s evil brother Krampus has infiltrated the group and intends to usurp Nick. So instead of little gifts and personal miracles, the tradition of Krampus will take precedent. Which is fine, except his tradition is kidnapping a child for a year…

As Krampus takes over the Facebook page, the more people are aware of the miracles of St Nick, and the more they demand their own miracles. This of course, reflects the commercialisation of the holiday, and society’s shift in attitude towards feeling they are automatically owed the best, rather than receiving it unexpectedly. St Nick’s appearance is also a mirror to the country. He is ‘reincarnated’ in different forms depending on the country he is in, and his overweight, sweary, belligerent form is seen as the best disguise for 21st Century Britain.

I’m a huge fan of Caroline Smaile’s novel The Finding of Martha Lost and the same elements of magic with a heavy dose of realism is suffused in the pages of The Unwrapping of Theordora Quirke.

This is a brilliant, warm and witty take on the tale of visiting Christmas past, though St Nick is at pains to point out how Dickens never thanked him for giving him the idea for A Christmas Carol.

A lovely non- festive festive novel about realising we may already have a place we belong, without even knowing it.