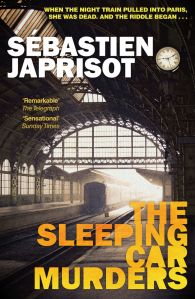 When the night train pulled into Paris, she was dead. And the riddle began . . .

A beautiful young woman lies sprawled on her berth in the sleeping car of the night train from Marseille to Paris. She is not in the embrace of sleep, or even in the arms of one of her many lovers. She is dead. And the unpleasant task of finding her killer is handed to overworked, crime-weary police detective Pierre ‘Grazzi’ Grazziano, who would rather play hide-and-seek with his little son than cat and mouse with a diabolically cunning, savage murderer.

Sébastien Japrisot takes the reader on an express ride of riveting suspense that races through a Parisian landscape of lust, deception and death. With corpses turning up everywhere, the question becomes not only who is the killer, but who will be the next victim . . .

A train travels overnight from Marseille to Paris. Six passengers share a sleeping carriage. Only five alight alive. When a young woman is found murdered, detective Pierre Grazziano, known as Grazzi, has to find the culprit. But as he tracks down the passengers it seems that the killer is getting there just before him, as the other passengers begin to die. Grazzi must find out the truth before the last passenger is murdered.

Grazzi is a reluctant murder investigator. He does not like the attention and pressure such a case brings, and knows that if things don’t go well, it is his head on the line. He does not always agree with his boss, and doesn’t always hide his derision. He is partnered with a young detective who seems more interested in a numbers game he carries around with him, than in police work.

The story itself is intriguing. Who killed Georgette Thomas? She had shared a sleeping carriage with five other travellers but had been the last to leave the compartment when the train arrived at its destination. She was alive when the others alighted and no clues were left with her body.

I loved the setting of the story, flitting between the carriage ride and Paris, it evoked a time gone by, when travelling a distance needed an overnight journey on a train, when a telephone in the home was unusual and when detecting wasn’t centered around DNA and computer analysis.

There is a lot of speech that goes on as narrated rather than spoken. I did find this a little distracting and it led to there being a little distance between myself and the story. There are also a lot of characters so it is easy to sometimes lose track of who is who.

The dénouement is one that will be familiar to crime fiction fans but it is done well. There is logic behind it, albeit the twisted logic of a killer.

This was an interesting read, in both the sense of the story and of the time and place. I was intrigued to read a book that was originally published in 1962 and to get a sense of what French crime fiction was like at the time.

An entertaining  read. I’m certain I’ll read more of Sebastien Japrisot’s back catalogue in the future.