Zoe Somerville is the author of The Night of the Flood, which was published by Head of Zeus on 3 September 2020.

Zoe kindly answered a few of my questions.

1. Tell us a little about The Night of the Flood.

It’s a dark love story set in the early 1950s on the Norfolk coast.

In the course of my novel, we follow the story of Verity Frost. She is 18, living on an isolated farm with her alcoholic father and dissatisfied brother, Peter. She is grieving for her mother, who drowned off the coast, and chafing against the constraints of feminine expectations. There is also Arthur, a Londoner who came to Norfolk as an evacuee who is in love with Verity. Into this mix comes Jack, a charming American airman who Arthur begins to suspect is spying for the Russians. We also hear the voice of Muriel, a spirited, wild girl who sees much more clearly than anyone else.

In the build up to the flood, tensions increase between all five of the characters. Everyone has secrets from everyone else, but the tragedy of the flood changes everything and the love triangle turns murderous.

When I found out about the North Sea flood of 1953, I knew immediately that this would be the backdrop, setting and major plot point of my novel. In January 1953 307 people died, 32,000 were evacuated and hundreds of thousands of acres of land was destroyed. I’m from Norwich and had heard of the flood but knew little about it. As I read the stories of drownings and heroism from that night I wanted more people to know about it but also, I wanted to see what happened to my characters in the crucible of such a disaster.

Both! When I have ideas for a novel I write some notes and sketch out a plot but my instinct is to start writing and see what happens. I think this is because I’m very restless and impatient and learn by doing rather than thinking in advance. This is what I did with The Night of the Flood. Inevitably, I had to then re-work the plan as I wrote. I was studying for an MA in Creative Writing at Bath Spa at the time and lots of other people were going through the same process. However, with my second novel I’ve tried to plan a lot more because the process was so painful with my first novel!

4. Was there anything about the process of creating a novel that surprised you?

It shouldn’t have surprised me – but just how much revising and editing I would have to do! This will be no shock to anyone who’s written a novel but it turns out it’s the most important part of the process. Once I had an agent and then an editor, this was much more fun as I felt as if I had people who were just as invested in the novel as I was rather than writing ‘into the void’.

I love walking (usually with my family to somewhere that sells coffee and/or is a pub!), cycling, running, Zumba and yoga. This makes me sound very active but I only started doing most of the above (apart from walking!) when I was in my forties. I was quite sloth-like before, but realised that a variety of activities really helped with my mental health and as a side effect, can sometimes be invaluable in chewing over issues with a book. The other thing I do to de-stress is attack my allotment. I’m a novice gardener but I’ve found weeding to be extremely therapeutic!

That would be absolutely impossible! But if I’m under pain of death, I’d say Rebecca because it’s perfect.

This is cheating, but I might also choose Hilary Mantel’s Beyond Black about a medium who can really see ghosts, is one of my favourite books. If any readers like very dark humour and a dry sense of the gothic this is a must-read. I thought it was absolutely brilliant.

Q. How difficult was it to get published?

The reason for this question is that it was not at all easy and I want to inspire others to persevere.

A. I started writing seriously in my thirties, wrote a novel on my own (which was awful!) in between childcare and working as a teacher, then began an MA at the age of 39 in 2015. I finally found my agent in January 2019 after many false starts, re-writing and rejections, then my book deal last August! 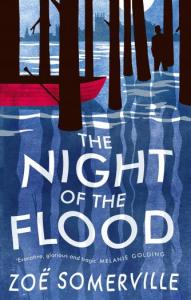 No-one could have foreseen the changes the summer of 1952 would bring. Cramming for her final exams on her family’s farm on the Norfolk coast, Verity Frost feels trapped between past and present: the devotion of her childhood friend Arthur, just returned from National Service, and her strange new desire to escape.

When Verity meets Jack, a charismatic American pilot, he seems to offer the glamour and adventure she so craves, and Arthur becomes determined to uncover the dirt beneath his rival’s glossy sheen.

As summer turns to winter, a devastating storm hits the coast, flooding the land and altering everything in its path. In this new, watery landscape, Verity’s tangled web of secrets, lies and passion will bring about a crime that will change all their lives forever.

Zoe Somerville is a writer and English teacher. Having lived all over the world – Japan, France, Washington – she now lives in Bath with her family. After completing a creative writing MA at Bath Spa, Zoe started writing her debut novel, which is inspired by her home county, Norfolk, and the devastating North Sea flood of the 1950s.