Nadine Akkerman is the author of Invisible Agents, published by OUP on 11 February 2020.

Nadine kindly answered a few of my questions.

1. Tell us a little about Invisible Agents.

It’s a study of the women spies of the seventeenth century, how they operated, and the way in which they used the prejudice of society as a disguise – the men in command generally didn’t believe that women, who were obviously inferior intellectual beings, could possibly be involved in espionage. This allowed the women, who were known pejoratively as ‘she-intelligencers’ free rein to ply their trade, which they did extremely well. The same prejudice seems to have trickled down through academia over the past few hundred years so generations of (predominantly) male historians have been unable or unwilling to see them in the archives, hence the title.

While researching a deposed queen (the subject of my next book), I came across an intelligence network that worked within one of the biggest postal networks in Europe – it had a Black Chamber, a room where letters were opened, copied, translated, decoded if necessary, and then resealed and sent on their way. The information was then sold to the highest bidder. When I discovered that this spy network was run by a woman (whose family still control the postal system in Germany, by the way), I wondered what other women might be lurking in the archives. The answer came as quite a surprise.

3. How much planning and research was involved in writing Invisible Agents?

It took over five years, during which time I had to learn all of the techniques these women used to keep themselves safe, following paper trails, decoding ciphers, spotting invisible ink, studying the folds of what were once booby-trapped letters took ages, and transcribing often illegible hands in a script that little resembles ours. This was on top of my training as an archival scholar, of course! It was highly challenging but immensely rewarding – the feeling you get when you catch a glimpse of something that you just know will lead you to someone new is indescribable.

4. Having been through the publishing process, is there anything about the process of creating a book that surprised you?

The success of Invisible Agents took me by surprise – it was written as an academic book, with an academic publisher, but it seemed to catch the imagination of a more general audience and I’ve been fortunate enough to speak at literary festivals all over the UK. It was also fascinating watching my research be turned into a work of fiction – my partner’s recent novel Killing Beauties allows some of my spies to live a second life.

Binge watch tv series, walk along the canals in Leiden, and when I can I love to watch the pelicans fishing in Florida.

How did you discover that Aphra Behn lied through her teeth? Well, to cut a long story short … would be to ruin the surprise! 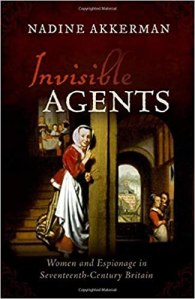 It would be easy for the modern reader to conclude that women had no place in the world of early modern espionage, with a few seventeenth-century women spies identified and then relegated to the footnotes of history. If even the espionage carried out by Susan Hyde, sister of Edward Hyde, Earl of Clarendon, during the turbulent decades of civil strife in Britain can escape the historiographer’s gaze, then how many more like her lurk in the archives?

Nadine Akkerman’s search for an answer to this question has led to the writing of Invisible Agents, the very first study to analyse the role of early modern women spies, demonstrating that the allegedly-male world of the spy was more than merely infiltrated by women. This compelling and ground-breaking contribution to the history of espionage details a series of case studies in which women ― from playwright to postmistress, from lady-in-waiting to laundry woman ― acted as spies, sourcing and passing on confidential information on account of political and religious convictions or to obtain money or power.

The struggle of the She-Intelligencers to construct credibility in their own time is mirrored in their invisibility in modern historiography. Akkerman has immersed herself in archives, libraries, and private collections, transcribing hundreds of letters, breaking cipher codes and their keys, studying invisible inks, and interpreting riddles, acting as a modern-day Spymistress to unearth plots and conspiracies that have long remained hidden by history.