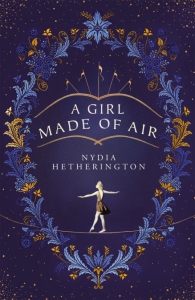 This is the story of The Greatest Funambulist Who Ever Lived…

Born into a post-war circus family, our nameless star was unwanted and forgotten, abandoned in the shadows of the big top. Until the bright light of Serendipity Wilson threw her into focus.

Now an adult, haunted by an incident in which a child was lost from the circus, our narrator, a tightrope artiste, weaves together her spellbinding tales of circus legends, earthy magic and folklore, all in the hope of finding the child… But will her story be enough to bring the pair together again?

The nameless narrator, known to the reader only as Mouse, takes us through her life, born  the unwanted child of a circus performer and a lion tamer through to her being saved by Serendipity Wilson and training to become a tight-rope walker, to be the greatest funambulist who ever lived. Along the road to fame, there are many chances to fall…

Run away to the circus, without leaving your chair

The story is told as a letter to an unnamed journalist, as Mouse recalls her time walking on earth from unwelcome birth to her arrival at her room in New York. There is no direct speech, conversation is differentiated by italics, which adds to the feeling of recollection, and to the slightly surreal air.

Mouse has not had an easy life. The unwanted child to the circus’ main attraction, she is ignored by her mother Marina and by her father Manu, him to caught up with his adoration for Marina to want or dare to do otherwise. The rest of the circus folk ignore her, for unknown reasons and she grows through the minimum of care and the maximum of personal strength. Then Serendipity Wilson takes Mouse under her wing and into her wigwam.

Mouse is a complex character. A product of her childhood. She is a dreamy child, prone to imaginative fancies, though she barely speaks. She finds her voice on the high wire, as Serendipity teaches her how to be a funambulist.

And so Mouse lives her life under the big top, until tragedy strikes. When her life, a constantly moveable feast as it was, changes irrevocably, she does the only thing she can, she runs away from the circus.

There is an essence of magic sprinkled throughout the book, the colourful Joey Clowns are easy to imagine, the roars of Manu’s lions easily heard. There is also a sense of detachment, given because we never know Mouse’s real name and only hear the voices of the characters through her. It did mean I perhaps wasn’t as drawn to Mouse as I would have liked but it didn’t mean I was interested in her story and wanted her to be happy, or at least find the redemption she believed she needed.

All of the characters are easy to imagine, from Fausto the ring master to Aunt Betty who lives in a roller coaster and takes Mouse under her wing.

There is a world outside of the circus but it is hard to pinpoint. There are no direct references to the date or country so the reader has to fill in the blanks. That too adds to the surreal air that envelopes the circus camp and makes sure that the circus is the reader’s whole world too.

An interesting, colourful read. I look forward to reading more from Nydia Hetherington in the future.

Originally from Leeds, Nydia Hetherington moved to London in her twenties to embark on an acting career. Later she moved to Paris where she studied at the Jacques Lecoq theatre school before creating her own theatre company. When she returned to London, she completed a creative writing degree at Birkbeck.