Steve Cavanagh is the author of the Eddie Flynn series, including The Defence, The Liar, The Plea and Thirteen. His latest novel Fifty-Fifty is published by Orion on 3 September 2020. 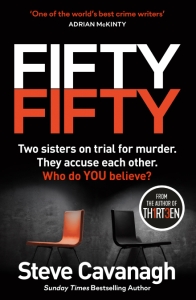 Two sisters on trial for murder. They accuse each other.
Who do YOU believe?

‘My dad’s dead. My sister Sofia killed him. She’s still in the house. Please send help.’

‘My dad’s dead. My sister Alexandra killed him. She’s still in the house. Please send help.’

One of them is a liar and a killer.

Steve Cavanagh was born and raised in Belfast before leaving for Dublin at the age of eighteen to study Law. He practiced civil rights law and was involved in several high-profile cases; in 2010 he represented a factory worker who suffered racial abuse in the workplace and won the largest award of damages for race discrimination in Northern Ireland legal history. He holds a certificate in Advanced Advocacy and lectures on various legal subjects (but really he just likes to tell jokes). His novel The Liar won the CWA Gold Dagger award while his follow-up novel Thirteen won the Theakston Old Peculier Crime Novel of the Year Award in 2019. Twisted was a Sunday Times Top 10 Bestseller. He is married with two young children. Follow Steve on Facebook at facebook.com/SSCav1 and Twitter @SSCav