The Girl from Vichy by Andie Newton was published by Aria Fiction on 13 August 2020.

I tried to relax again, putting the woman out of my head long enough to think about the convent, but then someone yelled that the train was making an emergency stop. The train shimmied with a loud squeal, metal on metal, slowing to a crawl, and people popped out of their seats to move into the aisle. The woman gripped her book tightly, eyes strained, and then oddly relaxed like a lumpy blanket just as the French police burst through the doors at the end of the train car.

I bolted to a stand, clutching my chest, first from the sound and then from the looks on their faces as they ran down the aisle toward the other end, boots thumping with rifles slung over their shoulders.

A burly gendarme with grit in his teeth pushed one of the old ladies back into her seat, but she stumbled, throwing a weak little hand against the window to catch herself, which made many of us gasp. More police rushed in and ran down the aisle, only this time the diplomats who’d been reading their papers trailed behind them like dogs on a tether.

The doors closed suddenly on both ends of the train car. A piercing quietness followed. Few people moved, aside from their eyes. Heat waving up from the tracks into our still compartment roasted us like chickens. A baby’s cry from somewhere buoyed the restless uncertainty ballooning among us all, then a whisper of sabotagers swept through the car almost faster than the heat, louder and louder until someone finally said, ‘Résistance.’

Résistance? I stood on my toes, trying to see into the other train car, when a man caught my eyes through the body gaps. ‘They’re invisible,’ he whispered, eyes tormented and grey. ‘Phantoms in the night and in the day.’

I gripped my pocketbook, suddenly feeling nervous, watching police run along the outer edge of the car, looking under the train as if there was something or someone to find. Seconds passed, holding our breaths, mouths as wide as our eyes, waiting for a shootout, arrest or both. Then the police stopped running, lit cigarettes and appeared to be chatting.

The whole train exhaled at once.

Some looked relieved nothing serious had happened; others chuckled as if watching the French police run around with nowhere to go was amusing and worth the trouble. The doors opened, sending a burst of fresh air into the train car. The woman across from me who’d seemed unnerved by the gendarmes rushing around was now in a tizzy, bolting from her seat and pushing herself into the crowded aisle. ‘If you please,’ she said, the heel of her clunky shoe smashing the top of my foot. ‘Out of the way!’

I yelped, though it did nothing but startle the old ladies next to me as she elbowed her way through the train car and past women and children as if she were the only passenger who mattered. I followed the pack, shuffling toward the exit, armpits near my face with hands pushing me on the back.

As the war in Europe rages on, Adèle Ambeh dreams of a France that is free from the clutches of the new regime. The date of her marriage to a ruthless man is drawing closer, and she only has one choice – she must run.

With the help of her mother, Adèle flees to Lyon, seeking refuge at the Sisters of Notre Dame del la Compassion. From the outside this is a simple nunnery, but the sisters are secretly aiding the French Resistance, hiding and supplying the fighters with weapons.

While it is not quite the escape Adèle imagined, she is drawn to the nuns and quickly finds herself part of the resistance. But her new role means she must return to Vichy, and those she left behind, no matter the cost.

Each day is filled with a different danger and as she begins to fall for another man, Adèle’s entire world could come crashing down around her.

Adèle must fight for her family, her own destiny, as well as her country. 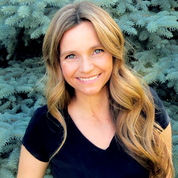 Andie Newton is an American writer living in Washington State with her husband and two boys. She writes female-driven historical fiction set in WWII. The Girl I Left Behind is her first novel. She would love to say she spends her free time gardening and cooking, but she’s killed everything she’s ever planted and set off more fire alarms than she cares to admit. Andie does, however, love spending time with her family, ultra trail running, and drinking copious amounts of coffee.