Matthew Harffy is the author of the Bernicia Chronicles including The Serpent Sword, Warrior of Woden and Storm of Steel. The seventh book in the series, Fortress of Fire, was published by Aries Fiction in ebook on 6 August 2020.

Today I have an extract from Fortress of Fury.

Despite the odds against him, Beobrand grinned savagely, his teeth flashing in the dark. He would be hard-pressed against so many, armed only with a large knife as he was, and yet he felt no fear. He had walked so long with death that it seemed like an old friend to him now. Something in the glint of his eye and the broad smile on his face gave the two men before him pause. They faltered, and in that instant, without any warning, and scarcely aware what he was going to do, Beobrand surged forward. Absently he heard the men behind him begin to run toclose the distance. He ignored them. They were too far away yet to be of concern.

He sped forward with a speed that had undone many an adversary.

One of the men seemed completely frozen, whether with fear or merely shock, Beobrand did not know, or care. He rushed forward, clasping the wrist of the man’s sword-arm in his mutilated left hand and, without slowing, dragging the deadly edge of his seax across the man’s throat. The blade was sharp and it severed flesh, arteries and cartilage until it scraped against bone. Hot blood gushed over Beobrand’s hand and the man fell away from him, his wrist slipping from Beobrand’s left half-hand as the would-be killer gurgled and choked on his lifeblood.

The second opponent had been quicker to regain his wits and it was all Beobrand could do to parry the scything blow that flashed out of the darkness to his right. Sparks flew and the man grunted. Beobrand shoved him away and took several rapid steps back, past the body of the dying man, moving so that the church was now to his rear and all four remaining enemies were facing him.

The four men drew closer together, unconsciously looking for protection and safety in their numbers.

“Are you all ready to die tonight?” Beobrand asked. His tone was even, as though he were asking them about the state of the weather, but the rattling cough of their dying comrade lent the words a deadly seriousness.

None of the men responded. Instead, as if they had realised the error of their positioning, they began to put space between themselves, spreading out.

Beobrand knew they would attack soon. And, if he stayed in the open, in all likelihood he would die. They had the numbers to surround him again and no matter how skilled, he would eventually succumb to a cut from behind. He would not be able to watch all of them at once.

Before they had time to organise themselves, Beobrand jogged backward towards the church. They chased after him, clearly not ready to allow him to escape so easily. A moment later, the cold stone of the church loomed behind him and Beobrand offered them another grin. If he could keep his back to the building, he could only be attacked from the front and flanks. That was something, and all the edge he could find.

No sooner had he reached the church than the man whose sword he had parried jumped forward, feinting at Beobrand’s head. Beobrand anticipated the man’s next move, shifting his weight to one side. The man’s sword slid harmlessly past Beobrand’s chest, leaving his arm exposed. Beobrand flicked out with the seax, drawing a long, deep cut along his attacker’s forearm. Blood welled black in the night and the man’s sword clattered to the earth.

Beobrand snatched up the weapon, transferring his seax to his left hand. His grip was weak on that side, where he had lost the last two fingers years before. But he was still glad of the seax nestling in his half-hand. His left hand might be weaker than his right, but it was still strong enough to hold a weapon; to cut, and to kill. 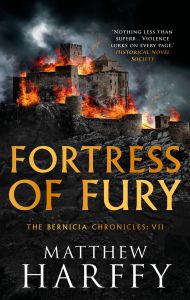 Beobrand is besieged in the action-packed instalment in the Bernicia Chronicles set in AD 647 Anglo-Saxon Britain.

War hangs heavy in the hot summer air as Penda of Mercia and his allies march into the north. Caught unawares, the Bernician forces are besieged within the great fortress of Bebbanburg.

It falls to Beobrand to mount the defence of the stronghold, but even while the battle rages, old and powerful enemies have mobilised against him, seeking vengeance for past events.

As the Mercian forces tighten their grip and unknown killers close in, Beobrand finds himself in a struggle with conflicting oaths and the dreadful pull of a forbidden love that threatens to destroy everything he holds dear.

With the future of Northumbria in jeopardy, will Beobrand be able to withstand the powers that beset him and find a path to victory against all the odds?

Matthew Harffy grew up in Northumberland where the rugged terrain, ruined castles and rocky coastline had a huge impact on him. He now lives in Wiltshire, England, with his wife and their two daughters.