The Young Survivors by Debra Barnes is published by Duckworth Books today, 23 July 2020.

Today I have a post from Debra, detailing why she wrote The Young Survivors.

It wasn’t that my mother Paulette never spoke about her early years, she simply didn’t remember. Growing up I was told of her twin sister Annette who had died at Auschwitz, along with their brother Nathan. I knew I only had one set of grandparents because the other had died in the Holocaust. There was little else to tell. Mum was born in 1938, so had been a young child throughout the war. Her only memory was of taking Holy Communion with the nuns who gave her refuge.

As a family we rarely spoke about the Holocaust – I suppose it was easier for everyone that way. It was an uncomfortable subject which was avoided.

Then, in 2006, Mum was reunited with Denise Holstein. At the age of 16, Denise was put in charge of the youngest children at a Jewish orphanage in Louveciennes, Paris. Just weeks before the allies arrived into the capital, the SS emptied all Jewish children’s homes. Most of the children were transported to Auschwitz. Denise accompanied her group of charges, including Annette and Nathan. The children were sent directly to the gas chambers while Denise was selected for work. Miraculously, Mum was not taken. She was in hospital with measles. By the time the Gestapo went to arrest her, she was hidden in a convent, where she stayed safely until the end of the war.

At their reunion, Denise was able to tell Mum about life in the orphanage. It piqued my curiosity and I wanted to find out more. I now felt I had permission to do so, as if the meeting with Denise had opened a door which had been locked for many years. There was information available online but it was a time consuming process; one search could lead to hours lost on the internet, often not even connected to what I was looking for but always fascinating. I felt frustrated as there were never enough hours to get the answers I was looking for.

Mum died after a short illness in 2010. In 2013 I was offered redundancy and took some time for my research. I travelled to the south of France and met with Denise. I was reassured when she told me how the children in the orphanage had happily spent their days, unaware of what was going on around them. I connected with the Jewish community in Louveciennes who invited me to visit the orphanage. I went to the Shoah Memorial in Paris and to Metz where my mother was born.

I blogged about my research and was contacted by others with similar family stories. One man who had more than likely played with my mother when they were two years old. A woman whose mother had been in the same orphanage but managed to escape. Another whose father had been the director of the orphanage until he was ousted by the Nazis. We all seemed to benefit from meeting and sharing our experiences.

Inspired by what I learnt but frustrated at still having so many unanswered questions and blanks in the story, I decided to write a fictional novel, called The Young Survivors, following the fate of a French Jewish family during the Holocaust. I continued with my research but now focussing more widely on what happened in Nazi-occupied France. Thankfully it was less painful to write about fictional characters rather than my own family; if I hadn’t done so I probably would have been in tears much of the time.

I was meticulous with my research and therefore delighted to receive an endorsement from Dr Toby Simpson of The Wiener Holocaust Library who said, “Throughout the book, readers are offered rich and detailed insights into the grave peril and struggle for survival that Jews faced in Vichy and Nazi-occupied France, which is still not a widely-understood aspect of the Holocaust.”

When I look back, I am amazed at how my life has changed in the past decade. From someone almost afraid to learn about the Holocaust I have now written a novel on the subject and since 2017 I work for The Association of Jewish Refugees running the My Story project, helping Holocaust refugees and survivors to write their own life stories.

To have a book published has always been a dream of mine but to have written about such an important subject which I hope will help educate others and leave a legacy, is something which makes me very proud. 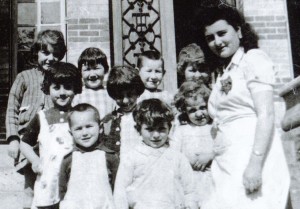 Denise Holstein (far right) at the orphanage in Louveciennes with her charges shortly before they were deported. In the middle of the back row are Annette (2nd from left) and Paulette to her right.

What if everyone you loved was suddenly taken away? Five siblings struggle to stay together as the tides of war threaten to tear them apart.

When Germany invades France in the Second World War, the five Laskowski children lose everything: their home, their Jewish community and most devastatingly their parents who are abducted in the night. There is no safe place left for them to evade the Nazis, but they cling together, never certain when the authorities will come for what is left of them.

Inspired by the poignant, true story of the author’s mother, this moving historical novel conveys the hardship, the uncertainty and the impossible choices the Laskowski children were forced to make to survive the horrors of the Holocaust.

Debra Barnes studied journalism and has been a regular contributor to the Jewish News. Since January 2017, she runs a project for The Association of Jewish Refugees (AJR) to produce individual life story books for Holocaust survivors and refugees. She has been interviewed by BBC Radio regarding her mother’s story and has had a short documentary made about her research.