Not usually one who joins in with memes, challenges and the like I spotted this one devised by Cathy at 746Books and have taken part for the last three years. I think I’ve only made it once!

Cathy is hoping to read 20 books between 1 June and 1 September, meaning she has the mammoth task of reading about 7 books a month. You can read about the challenge on Cathy’s excellent blog here.

I think I’m doomed to failure before I start but I need to make a dent in the TBR and this challenge gives me the push I need. I’ve selected 10 books and I’m allowing myself 10 wildcards so that I can choose my read as my fickle taste dictates. I may swap some of these out if I change my mind or find I can’t read them. I may even swap a lengthy book for a shorter one if I’m running out of time. Some are books I’ve agreed to review or are future releases, others simply because they caught my eye when I was scanning the TBR. I’m very much a mood reader though so I may also swop any of the 10 I have listed as I find I have to read according to my mood, or the desire to read tends to disappear.

I’ll be reviewing all of the books I manage to read and I’ll be using the 20 books of Summer logo picture on each one. I’ll also link back to my reviews on here so I can keep track of how many I have read.

1957, south-east suburbs of London.
Jean Swinney is a feature writer on a local paper, disappointed in love and – on the brink of forty – living a limited existence with her truculent mother: a small life from which there is no likelihood of escape.

When a young Swiss woman, Gretchen Tilbury, contacts the paper to claim that her daughter is the result of a virgin birth, it is down to Jean to discover whether she is a miracle or a fraud. But the more Jean investigates, the more her life becomes strangely (and not unpleasantly) intertwined with that of the Tilburys: Gretchen is now a friend, and her quirky and charming daughter Margaret a sort of surrogate child. And Jean doesn’t mean to fall in love with Gretchen’s husband, Howard, but Howard surprises her with his dry wit, his intelligence and his kindness – and when she does fall, she falls hard.

But he is married, and to her friend – who is also the subject of the story she is researching for the newspaper, a story that increasingly seems to be causing dark ripples across all their lives. And yet Jean cannot bring herself to discard the chance of finally having a taste of happiness.

But there will be a price to pay – and it will be unbearable. 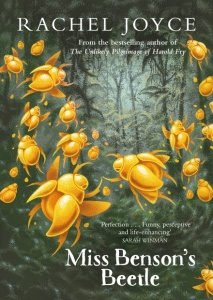 It is 1950. In a devastating moment of clarity, Margery Benson abandons her dead-end job and advertises for an assistant to accompany her on an expedition. She is going to travel to the other side of the world to search for a beetle that may or may not exist.
Enid Pretty, in her unlikely pink travel suit, is not the companion Margery had in mind. And yet together they will be drawn into an adventure that will exceed every expectation. They will risk everything, break all the rules, and at the top of a red mountain, discover their best selves.

This is a story that is less about what can be found than the belief it might be found; it is an intoxicating adventure story but it is also about what it means to be a woman and a tender exploration of a friendship that defies all boundaries.

3.  The Blessed Girl by Angela Mokholwa (instead of The Illustrated Child by Polly Crosby.)

4. The Lonely Fajita by Abigail Mann. 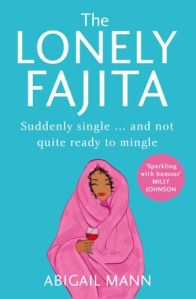 Breaking up is hard to do… Or the best thing that could happen to you!

It’s Elissa’s birthday, but her boyfriend hasn’t really noticed – and she’s accidentally scheduled herself a cervical smear instead of celebration drinks. Great.

Then there’s her borderline-psychotic boss, the fact she’s not making but losing money at work, and her sinking feeling she’s about to be dumped.

But Elissa will soon find out that being single doesn’t have to be lonely… And with a little help from her friends, even a girl with minus £1,000 in her account can have a lot of fun.

5. The Missing Pieces of Nancy Moon by Sara Steele.

Sometimes you have to disappear to find out who you are…

Florence Connelly is broken hearted. Her marriage has collapsed under the weight of the loss she shares with her husband, and her beloved grandmother has just died. Even the joy she found in dressmaking is gone.

But things change when Flo opens a box of vintage 1960s dress patterns found inside her grandmother’s wardrobe. Inside each pattern packet is a fabric swatch, a postcard from Europe and a photograph of a mysterious young woman, Nancy Moon, wearing the hand-made dress.

Flo discovers that Nancy was a distant relation who took the boat train to Paris in 1962 and never returned. With no one to stay home for, Flo decides to follow Nancy’s thread. She unravels an untold story of love and loss in her family’s past. And begins to stitch the pieces of her own life back together.

6. We Begin at the End by Chris Whitaker.

Now, he’s been released from prison and is back in his hometown of Cape Haven, California. Not everyone is pleased to see him. Like Star Radley, his ex-girlfriend, and sister of the girl he killed.

Duchess Radley, Star’s thirteen-year-old daughter, is part-carer, part-protector to her younger brother, Robin – and to her deeply troubled mother. But in trying to protect Star, Duchess inadvertently sets off a chain of events that will have tragic consequences not only for her family, but also the whole town.

7. The Curator by M. W. Craven (this replaced Escape to the French Farmhouse by Jo Thomas which I read before 20 Books of Summer began)

It’s Christmas and a serial killer is leaving displayed body parts all over Cumbria. A strange message is left at each scene: #BSC6

Called in to investigate, the National Crime Agency’s Washington Poe and Tilly Bradshaw are faced with a case that makes no sense. Why were some victims anaesthetized, while others died in appalling agony? Why is their only suspect denying what they can irrefutably prove but admitting to things they weren’t even aware of? And why did the victims all take the same two weeks off work three years earlier?

And when a disgraced FBI agent gets in touch things take an even darker turn. Because she doesn’t think Poe is dealing with a serial killer at all; she thinks he’s dealing with someone far, far worse – a man who calls himself the Curator.

And nothing will ever be the same again . . .

8. My Husband Simon by Mollie Panter-Downes. 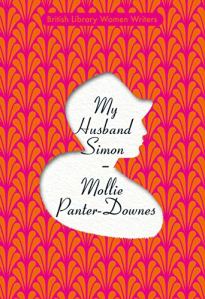 Nevis Falconer, a young, sophisticated novelist, meets and marries Simon Quinn. She comes to realise that her passionate marriage is stifling her creative talent, and finds herself increasingly distracted and disillusioned with her writing. Then one day in London she meets Marcus Chard, her American publisher, and everything changes.

ONE WRONG MOVE
A body is found bricked into the walls of a house. From the state of the hands, it’s clear the dead man was buried alive. Soon, the victim is linked to an old missing person’s case and DS Adam Tyler is called.
WILL IGNITE
As the sole representative of South Yorkshire’s Cold Case Review Unit, Tyler recognises his role for what it is – a means of keeping him out of the way following an ‘incident’. When this case falls in his lap, he grabs the opportunity to fix his stagnating career.
THE CITY
And then Tyler discovers he has a connection to the case that hopelessly compromises him. He makes the snap decision not to tell his superiors, certain that he and only he can solve the crime. But now Tyler must move carefully to find out the truth, without destroying the case or himself.

Meanwhile, someone in the city knows exactly what happened to the body. Someone who is watching Adam closely. Someone with an unhealthy affinity with fire. . .

10. Where We Belong by Anstey Harris. 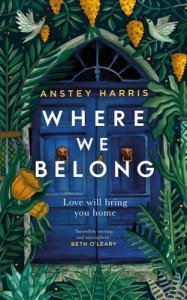 One summer.
One house.
One family learning to love again.

Cate Morris and her son, Leo, are homeless, adrift. They’ve packed up the boxes from their London home, said goodbye to friends and colleagues, and now they are on their way to ‘Hatters Museum of the Wide Wide World – to stay just for the summer. Cate doesn’t want to be there, in Richard’s family home without Richard to guide her any more. And she knows for sure that Araminta, the retainer of the collection of dusty objects and stuffed animals, has taken against them. But they have nowhere else to go. They have to make the best of it.

But Richard hasn’t told Cate the truth about his family’s history. And something about the house starts to work its way under her skin.
Can she really walk away, once she knows the truth?

These are the wildcards: (all update as I read them).

1. My Sister, the Serial Killer by Oyinkan Braithwaite. You can read my review here.

2. The Phone Box at the Edge of the World by Laura Imai Messina. You can read my review here. 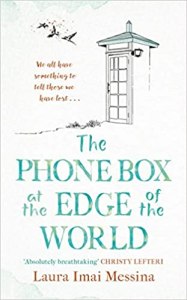 3. The Bookish Life of Nina Hill by Abbi Waxman. 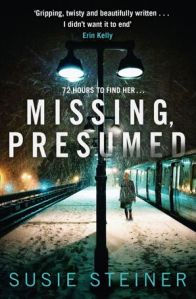 4. The Readers’ Room by Antoine Laurain.

7. The Lamplighter by Jackie Kay. 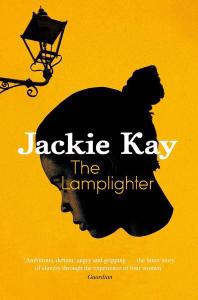 First produced as a play, on the page it reads as a profound and tragic multi-layered poem. We watch as four women and one man tell the story of their lives through slavery, from the fort, to the slave ship, through the middle passage, following life on the plantations, charting the growth of the British city and the industrial revolution. Constance has witnessed the sale of her own child; Mary has been beaten to an inch of her life; Black Harriot has been forced to sell her body; and our lead, the Lamplighter, was sold twice into slavery from the ports in Bristol. Their different voices sing together in a rousing chorus that speaks to the experiences of all those brutalised by slavery, and lifts in the end to a soaring and powerful conclusion.

8. The Search Party by Simon Lelic

9. Reasons to be Cheerful by Nina Stibbe.

Are you taking part in 20 Books of Summer or even 15, 10 or 5? Do let me know what you think you’ll be reading and if you’ve read any of my choices.