Peter Swanson is the author of The Girl With a Clock for a Heart, The Kind Worth Killing and Her Every Fear. His latest novel, Rules for Perfect Murders was published by Faber and Faber on 5 March 2020.

I contacted Old Devils, a mystery bookstore in Boston, and John
Haley, the owner at the time, created a job for me. I would be the
events manager, but also create content for the store’s burgeoning
blog, a site for mystery lovers. My last day at Redline was the store’s
last day in business, as well. Mort and I locked the front doors together,
then I followed him back to his office, where we drank from
a dusty bottle of single malt that had been given to him by Robert
Parker. I remember thinking that Mort, without his wife, and
now without the store, wouldn’t make it through the winter. I was
wrong. He lived through the winter and spring, but he did manage
to die the following summer at his lake house at Winnipesaukee, a
week before Claire and I were planning to visit.
“Eight Perfect Murders” was the first piece I wrote for the Old
Devils blog. John Haley, my new boss, had asked me to write a
list of my favorite mystery novels, but instead I pitched the idea of
writing a list of perfect murders in crime fiction. I don’t exactly
know why I was reluctant to share my favorite books yet, but I
remember thinking that writing about perfect murders might generate
more traffic. This was right around the time that several blogs
were taking o , making their authors rich and famous. I remember
someone doing a blog about making one of Julia Child’s recipes
every day that was turned into a book, and maybe even a movie.
I think I must have had some delusions of grandeur that my blog
platform might turn me into a public and trusted aficionado of
crime fiction. Claire added fuel to the re by telling me repeatedly
that she thought this blog could really blow up, that I’d found
my calling— a literary critic of crime fiction. The truth was that
I’d already found my calling, at least I thought I had, and I was a
bookseller, content with the hundreds of minute interactions that
make up a bookseller’s daily life. And what I loved most of all was
to read— that was my true calling. 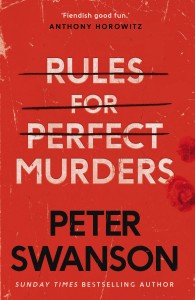 A series of unsolved murders with one thing in common: each of the deaths bears an eerie resemblance to the crimes depicted in classic mystery novels.

The deaths lead FBI Agent Gwen Mulvey to mystery bookshop Old Devils. Owner Malcolm Kershaw had once posted online an article titled ‘My Eight Favourite Murders,’ and there seems to be a deadly link between the deaths and his list – which includes Agatha Christie’s The ABC Murders, Patricia Highsmith’s Strangers on a Train and Donna Tartt’s The Secret History.

Can the killer be stopped before all eight of these perfect murders have been re-enacted?

Peter Swanson’s debut novel, The Girl With a Clock for a Heart (2014), was described by Dennis Lehane as ‘a twisty, sexy, electric thrill ride’ and was nominated for the LA Times book award. His follow up The Kind Worth Killing (2015), a Richard and Judy pick, was shortlisted for the Ian Fleming Silver Dagger, was named the iBook stores Thriller of the Year and was a top ten paperback bestseller. He lives with his wife and cat in Somerville, Massachusetts.