My to be read pile can be seen from space. In fact, it’s getting so big it may eclipse the sun.  It obviously doesn’t stop me from adding to it regularly or visiting the library for a temporary rehoming of books, because books are one of my major food groups.

I will admit though that I occasionally forget which books are loitering on the bookcase. So I thought I’d start having a rifle through and see what jumped out at me. Sadly for you, inspiration struck and I thought a good way of highlighting them would be looking at older books, newer books and borrowed ones. So the obvious extension was to through in something blue. 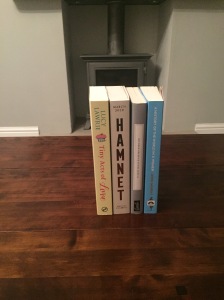 The old book this week is one that has been on my to read shelves for a shockingly long time. It’s Tiny Acts of Love by Lucy Lawrie which was published by Black and White Publishing on 6 March 2014.

Surviving motherhood? It’s all about having the right support network. Lawyer and new mum Cassie has a husband who converses mainly through jokes, a best friend on the other side of the world, and a taskforce of Babycraft mothers who make her feel she has about as much maternal aptitude as a jellyfish.

Husband Jonathan dismisses Cassie’s maternal anxieties, but is he really paying attention to his struggling wife? He’s started sleep talking and it seems there’s more on his mind than he’s letting on. Then sexy, swaggering ex-boyfriend Malkie saunters into Cassie’s life again. Unlike Jonathan, he ‘gets’ her. He’d like to get her into bed again too… And on top of all her emotional turmoil, she also finds herself advising a funeral director on ghost protocol and becomes involved in an act of hotel spa fraud, never mind hiding cans of wasp spray all over the house to deal with the stalker who seems to be lurking everywhere she looks.

Marriage and motherhood isn’t the fairytale Cassie thought it would be. Will her strange new world fall apart around her or will tiny acts of love be enough to get her through? Funny, perceptive and real, Tiny Acts of Love portrays the rawness of motherhood, the flipside of love and the powerful lure of paths not taken.

The new book arrived last month and was a pleasant surprise through the letterbox. Hamnet by Maggie O’Farrell, published by Tinder Press on 31 March 2020.

On a summer’s day in 1596, a young girl in Stratford-upon-Avon takes to her bed with a fever. Her twin brother, Hamnet, searches everywhere for help. Why is nobody at home?

Their mother, Agnes, is over a mile away, in the garden where she grows medicinal herbs. Their father is working in London. Neither parent knows that one of the children will not survive the week.

Hamnet is a novel inspired by the son of a famous playwright. It is a story of the bond between twins, and of a marriage pushed to the brink by grief. It is also the story of a kestrel and its mistress; flea that boards a ship in Alexandria; and a glovemaker’s son who flouts convention in pursuit of the woman he loves. Above all, it is a tender and unforgettable reimagining of a boy whose life has been all but forgotten, but whose name was given to one of the most celebrated plays ever written.

The borrowed book comes not from the library this time but from a friend at work. She shares my love of Persephone books so lent me Kitchen Essays by Agnes Jekyll published on 23 October 2008.

These short essays about food were first published in The Times and include titles such as ‘Tray Food’ and ‘Sunday Supper’ as well as ‘For The Too Fat’ and ‘For The Too Thin’.

Finally the blue book was a Christmas present from Mr Janet, who for many years has refused to buy me books for the festive season. This time he surprised me with A History of the World in 21 Women by Jenni Murray, published by Oneworld on 5 September 2019,  a choice he made without any steer from me. 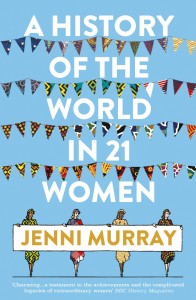 Marie Curie discovered radium and revolutionised medical science. Empress Cixi transformed China. Frida Kahlo turned an unflinching eye on life and death. Anna Politkovskaya dared to speak truth to power, no matter the cost. Their names should be shouted from the rooftops.

And that is exactly what Jenni Murray is here to do.