I don’t usually do a reading round up or do a book haul post. That said I thought it might be interesting (for me at least), if I had a look at how many books I manage to read in a month and compare it to how many arrive in the house. I think the TBR has finally become fed up of being ignored as has set out on a quest to slowly take over the house in the vain hope I won’t ignore it any longer.

I don’t read many books each month, at least not compared to many bloggers, though most people will probably wonder where I get my time to read as many books as I do. Because of that it is more than likely that the scales will be tipped towards incoming books rather than outgoing ones (i.e. read books or those given away). I am lucky in that I sometimes receive books for review. I actually didn’t buy any books this month, and even more shockingly it wasn’t as hard as it sounds! 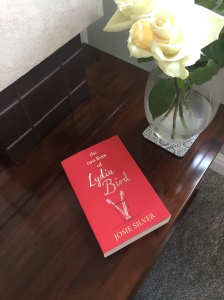 Here’s what arrived and is sat waiting to be read this month.

1. Dear Edward by Ann Napolitan, sent for review by Viking.

2. Amour: How the French Talk About Love by Stefania Rousselle, also sent for review by Viking.

4. The Hunted by Gabriel Bergmoser, sent for review by Faber.

5. Watching the Dark by Gytha Lodge, sent for review by Michael Joseph.

7. Castle Skull by John Dickson Carr, sent for review with the previous book by British Library.

8. The Two Lives of Lydia Bird by Josie Silver, sent for review by Penguin.

9. Perfect Kill by Helen Fields, sent for review by Avon.

11. Nothing to See Here by Kevin Wilson, this and Shepherd were sent for review by FMcM Associates.

12. The Book of Longings by Sue Monk Kidd, sent for review by Tinder Press.

So that’s what came into the Emson book stronghold. What about those that managed to escape the vault? I managed to read a mere three books this month. Here’s what they were:

3. The Burning Men by Will Schindler.

Luckily I gave away quite a few as my reading this month has been shockingly low. I gave away two bags to charity which came to 44 books. Two went to my sister-in-law, one to my mother-in-law and two to a friend. So that’s 12 books in and 52 out. I think this record will go unbroken for a very long time. Let’s see what February brings. Hopefully it won’t be bring an incident involving me and a toppling pile of books…