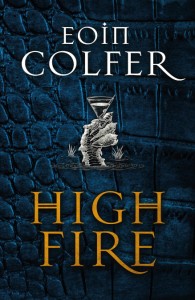 Squib Moreau may be swamp-wild, but his intentions are (generally) good: he really wants to be a supportive son to his hard-working momma Elodie. But sometimes life gets in the way – like when Fake Daddy walked out on them leaving a ton of debt, or when crooked Constable Regence Hooke got to thinking pretty Elodie Moreau was just the gal for him . . .

An apprenticeship with the local moonshine runner, servicing the bayou, looks like the only way to pay off the family debts and maybe get Squib and his momma a place in town, far from Constable Hooke’s unwanted courtship and Fake Daddy’s reputation.

Unfortunately for Squib, Hooke has his own eye on that very same stretch of bayou – and neither of them have taken into account the fire-breathing dragon hiding out in the Louisiana swamp . . .

For Squib Moreau, Regence Hooke and Vern, aka Lord Highfire of Highfire Eyrie, life is never going to be the same again.

Constable Regence Hooke is as crooked as they come. He hates Squib Moreau and just happens to have a penchant for Squib’s mum Elodie. Vern is very happy as a recluse, thank you very much. As long as his regular delivery of Absolut vodka keeps arriving. All three need the bayou they live around to survive. When Vern encounters Squib on the river one day an unlikely partnership is formed and the pair are soon united against Hooke. But can they outwit the cop determined to have the river for himself? Well given one of them is a dragon, they just might…

Lord Wyvern of Highfire, or Vern to his friend, is the last surviving dragon, or so he believes. He’s not about to embark on any trips to find out otherwise. Retired to the Louisiana river, he’s holed up on a little island, set up with Netflix and his regular supply of 40% proof libations courtesy of Waxman, the aforementioned friend. When he rather rashly rescues Squib from a sticky situation, it starts a chain of events that leads both dragon and boy on a journey where they will discover strengths they didn’t know they had.

The book is laced with humour throughout. I often found myself chuckling out loud. Vern is an ornery thing, cussing comes second nature to him and he’s acclimatised to the local lingo. Squib is a boy on the cusp of becoming a man. He’s walking a fine line between being honest and hard working and from getting himself into murkier goings on. He is though, at heart, a boy who loves his mother and wants to do right by her. So when he comes face to face with Vern, he somehow manages to get a job working for the dragon lord. The relationship changes as the two independent creatures come to realise that having friends isn’t that bad after all. It helps that they have a common enemy in Regence Hooke, a sociopath constable with delusions of grandeur, and  dreams of running guns straight through Vern’s home.

There is a sense of place about the story. I could easily imagine Vern’s shack and Waxman’s houseboat, I could see the tendril of trees and grasses brushing the murky waters of the river. I could see the gators, both in thrall to Vern and determined to try and out him (or eat him), silently slipping into the bayou and follow their eyes as they watched Squib motor up the bayou in his pirogue. I was even narrating the story in my head with a (very bad) southern accent for a while, despite not even knowing if I was pronouncing pirogue correctly.

There are references to human folly, gun control, the age of social media and much more, touched on in an light way that highlights the issues that they really are, and is cleverly done by looking at them from the viewpoint of a dragon who has much disdain for the human race.

There are lots of little light touches to the book that make it what it is. As I was reading, I kept realising just how much I was enjoying it. I only hope the author had as much fun writing it.

Fun and highly entertaining from first page to last. Recommended.

Leave a Reply to Claire | Art and Soul Cancel reply