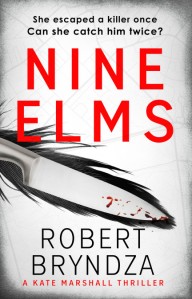 Kate Marshall was a promising young police detective when she caught the notorious Nine Elms serial killer. But her greatest victory suddenly became a nightmare.

Fifteen years after those catastrophic, career-ending events, a copycat killer has taken up the Nine Elms mantle, continuing the ghastly work of his idol.

Enlisting her brilliant research assistant, Tristan Harper, Kate draws on her prodigious and long-neglected skills as an investigator to catch a new monster. But there’s much more than her reputation on the line: Kate was the original killer’s intended fifth victim . . . and his successor means to finish the job.

Kate Marshall solved the case of her career. That same case also ended it. Discovering the identity of the Nine Elms serial killer led Kate into a downward spiral. 15 years on, she’s a lecturer at a coastal university and she’s tried to put the past behind her. When a copycat killer appears to strike, and the parents of a missing girl call on Kate to help, she is soon drawn back into a world she has tried hard to forget. Helped by her research assistant Tristan, she tries  find out who is resurrecting a serial killer’s macabre murder spree.

The book is quite graphic in places, perhaps a more realistic part of looking in on a serial killer. Those who are a little squeamish may want to turn away at some parts. There is mention of cannibalism and young women as victims. Whilst there are scenes with the serial killer in detention, the reader isn’t really let in on the motivation behind his crimes, or what drove him to kill.

This isn’t like a typical whodunit. The reader is lead along the same path as Kate and Tristan but also gets to see what is happening with the Nine Elms killer, his mother and most importantly his fan. We see the murders as they take place. There isn’t really any breadcrumb trail of clues leading to a big reveal as the reader is taken along for the ride with all of the characters.

Kate is a troubled character. Separated from her child, struggling every day not to drink, she is still a victim of the Nine Elms killer, albeit one who came away with her life. She has settled into a routine of sorts at Ashdean University and that routine is turned upside down when she agrees to look into the disappearance of a girl 20 years ago. Tristan is eager to get involved in an actual investigation, the cold cases he reads as prep for Kate’s lectures have led him to want to be more involved. We find out a little of Tristan, he lives with his sister and loves trainers for example, but I was left with the feeling that there was more room for him to grow.

Kate clashes with the officers in charge of the investigation into the copycat killings. There wasn’t much reflection on how she would have dealt with the same situation had she still been a police officer. It is possible that the same officers will appear in future books and it will be interesting to see how that develops.

Nine Elms very much sets the stage for a new series. There is much more to reveal about Kate and Tristan and I hope that comes to light in future books. The background was set for other peripheral characters to make a return and who could be regular backing singers to the main duo. Whilst it felt a little long in places, the action starts from basically the first paragraph, so there is not much time to wait before the stage is set. Overall I enjoyed Nine Elms and as is usually the case with the books I read, I sped through the last third.

This was the first book by Robert Bryndza I have read. I’ll be interested to see where he next takes Kate and Tristan.